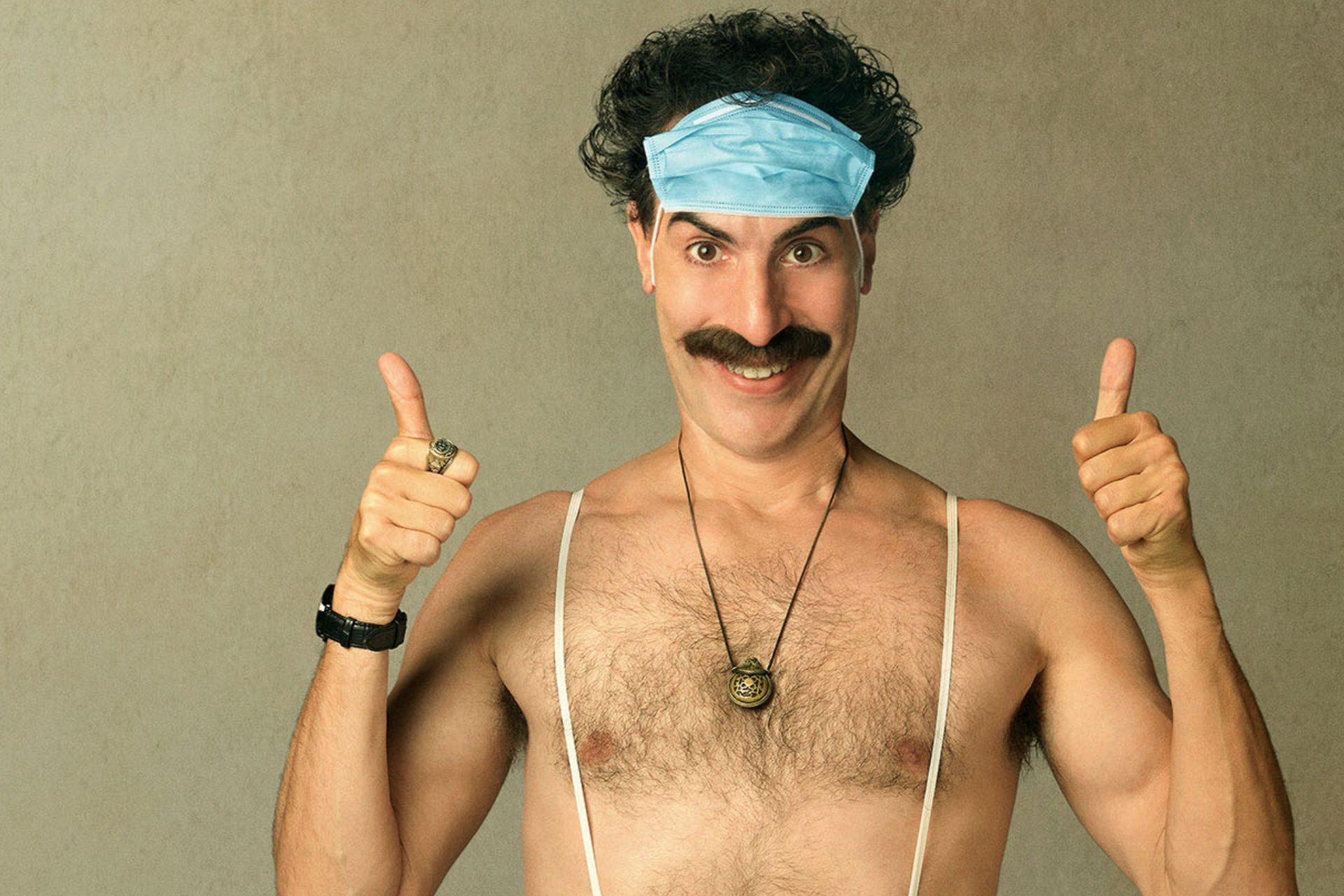 2006 was definitely the year of “Borat”. The film, featuring the amazing Sacha Baron Cohen as a foreign journalist sent to America to report on what the country is like, was like nothing ever seen before. As the presumed “fish out of water” Borat was invited into some very unusual places in our society, sadly (for those caught on camera) revealing the darker, prejudiced side of America. The questions is: could he (and, more importantly) should he try it again?

We find Borat (Cohen) doing hard labor, his punishment for having embarrassed his beloved country of Kasakhstan. However, many things have changed since Borat’s last trip. There is a new “premier” in charge of America. One that has the ability of making friends with presumed enemies. Borat is given his freedom if he will agree to take the country’s most famous celebrity, Johnny the Monkey, to the states and offer him as a bribe to President Trump. Borat agrees but a wrench is thrown into his plans when, after opening the crate that was supposed to contain Johnny the Money he instead finds his long neglected 15 year old daughter (Bakalova) who claims that Johnny sadly ate himself during the voyage. The girl has spent many years in her cage watching the animated fairy tale of the refugee woman Melania, who is now a princess. Deciding to offer his daughter to Trump, Borat begins his journey. And the hijinks begin!

You would think that EVERYONE in America would recognize Cohen/Borat as he makes his way across the country. In 2006 you couldn’t go anywhere without anyone mimicking “That nice,” his best known catch-phrase. And, in the beginning, that is true. People stop him on the street stop him or try to high five him. Which means Borat must disguise himself in order to set his plans in motion. Along the way he learns about Qanon, spends some time with some good old boys – during their time together they write a song about Barack Obama with the chorus “Inject him with the Wuhan Flu” – and infiltrates a conference where Vice President Mike Pence is the featured speaker. And then there’s Rudy Giuliani. More about him later.

The film also has a sub-plot, where Borat’s daughter, who he introduces as Sandra Jessica Parker Drummond, is taught how to be a lady in our society. She also is encouraged to get breast implants and constantly refers to a Kazakhstanian “handbook” that informs her of life’s lessons, including one that maintains her “vagine” has teeth and will eat her arm if she ever touches herself “down there.”

Where I felt the first film was mostly spontaneous, this one is about 50/50 spontaneous and scripted. Both versions are hilarious, though one is rather disturbing. You may have seen the many reports detailing Rudy Giuliani’s interaction with Sandra Jessica Parker Drummond, who poses as a journalist (her life dream) and somehow finagles an interview with the former NYC mayor. If you’ve seen Cohen’s work as Ali G or in various guises on his Showtime show “Who is America,” you know that there will be some questions asked to which the interviewer will reveal his ill-suited answers. However, things go from wacky to creepy when Giuliani becomes overly friendly with the girl. That’s all I’m going to say here. I don’t want to spoil the “big reveal” but I will say that the first thing I asked Alexa after the film was “is Rudy Giuliani married?”

At this time in history the entire world can use a good laugh. And there are plenty to go around here. And, with the US Presidential Election less than three weeks away, a lot of food for thought.

Rose: A Love Story review : a beautiful, eerie twist on the vampire myth
The Wolf of Snow Hollow review : weird and hard to pin down but funny
Advertisement