Now this sounds a treat!

Warner Bros. Home Entertainment will share a sneak peek at its upcoming DC Universe flick “Justice Society : World War II” to Wonder@Home attendees on Saturday March 27 at 11am PT. A star-studded panel discussion, featuring the likes of Stana Katic and Matt Bomer, will accompany the assorted clips and images revealed on the day.

Produced by Warner Bros. Animation, DC and WBHE, the all-new animated adventure finds modern-day Barry Allen – prior to the formation of the Justice League – discovering he can run even faster than he imagined, and that milestone results in his first encounter with the Speed Force. The Flash is promptly launched into the midst of a raging battle – primarily between Nazis and a team of Golden Age DC Super Heroes known as the Justice Society of America. Led by Wonder Woman, the group includes Hourman, Black Canary, Hawkman, Steve Trevor and the Golden Age Flash, Jay Garrick. The Flash quickly volunteers to assist his fellow heroes in tipping the scales of war in their favor, while the team tries to figure out how to send him home. But it won’t be easy as complications and emotions run deep in this time-skipping World War II thriller. 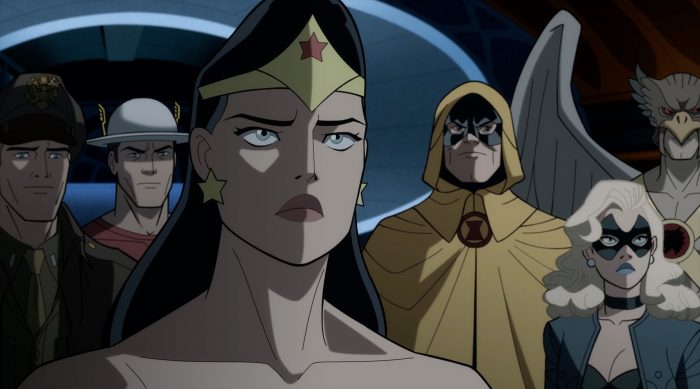 London, 1974. As Britain prepares for electrical blackouts to sweep across the country, trainee nurse Val (Rose Williams) arrives for her first day at the crumbling East London Royal Infirmary. With most of the patients and staff evacuated to another hospital, Val is forced to work the night shift, finding herself in a dark, near empty building. Within these walls lies a deadly secret, forcing Val to face both her own traumatic past and deepest fears in order to confront the malevolent force that’s intent on destroying everything around her

A new film chronicling the life and careers of musical geniuses The Bee Gees is in the works at Paramount. Kenneth Branagh (“Thor”) will direct the film, scripted by comedian Ben Elton. Surviving member of the trio Barry Gibb will executive produce the project, which had been gathering dust at Steven Spielberg’s DreamWorks and, more recently, at Amblin, before heading to Paramount. [More...]

Hulu has acquired the rights to sci-fi pic “Mother/Android” starring Chloë Grace Moretz and directed by Mattson Tomlin. The Matt Reeves produced project will air as a Hulu original.

Said Tomlin, “This film is a labor of love and I couldn’t be happier that in these extremely strange times, Mother/Android will be handled by a partner who truly cares. I feel extremely lucky to have Hulu bringing the film to audiences later this year.”

Said Reeves, “Mattson’s directorial debut is an intimate sci-fi film that is both beautiful and extremely personal, with a powerful, soulful performance from Chloë Moretz. I am incredibly excited that Hulu will be sharing Mother/Android with audiences.”

Set in the near future, MOTHER/ANDROID follows Georgia (Chloë Grace Moretz) and her boyfriend Sam (Algee Smith) through their treacherous journey of escape as their country is caught in an unexpected war with artificial intelligence. Days away from the arrival of their first child, they must face No Man’s Land – a stronghold of the android uprising, in hopes of reaching safety before giving birth.

Apple has given a straight-to-series order for “Lady in the Lake,” a new limited series directed and co-written by Alma Har’el that will co-star Academy Award winners Natalie Portman and Lupita Nyong’o. All three women will serve as executive producers along with Dre Ryan, who will co-create and co-write the series with Har’el, who will write the pilot.

“Lady in the Lake” is an adaptation of Laura Lippman’s New York Times best-selling novel of the same name. The limited series takes place in ’60s Baltimore, where an unsolved murder pushes housewife and mother Maddie Schwartz (Portman) to reinvent her life as an investigative journalist and sets her on a collision course with Cleo Sherwood (Nyong’o), a hard-working woman juggling motherhood, many jobs and a passionate commitment to advancing Baltimore’s Black progressive agenda.

“Lost” and “Yellowstone” alum Josh Holloway will star in HBO Max series “Duster”. The project, set in the 1970’s Southwest and chronicling the life of a getaway driver for a growing crime syndicate, will be produced by J.J Abrams.  [More…]

“Written by Gerstein, each season of the Untitled Huey Lewis Project is a self-contained romantic comedy inspired by the music of a beloved pop star. Huey Lewis sets the beat as the inspiration of Season 1, which interweaves a present day love story with a teen rom-com set in 1986. It is conceived as an homage to the great rom-coms of the ‘80s and ‘90s and a reminder that the Power of Love is, indeed, a curious thing.” [More….]

After its success on Amazon Prime over the weekend, expect the studio to want something a little sooner, nevertheless Eddie Murphy says there is a “Coming to America 3″ in his future – but he’s got to wait a few years before he crowns up again. ” There’s an idea for a Coming to America 3 that I have, but it doesn’t happen for 16 years. I have to be 75 to do it, and not make me up like 75 but really be 75.”