This Christmas, get your Baby Yoda underoosl! Come back next year and line up for a Tiny Chewbacca Coloring Book! And in 2022,  get the ‘Greedo & Son Adventures’ Pop Funko range!

I joke, and yet that won’t be far from what goes down.

Disney today announced a whole slate of “Star Wars” projects – most of them which will hit their Disney+ streaming platform, hogging your download quota with episodes of current Warsy-fave “The Mandalorian”.

look at this shizzle reel.. 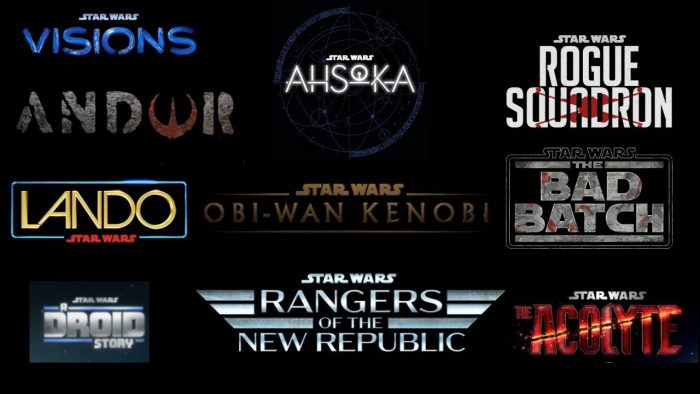 In a virtual presentation for investors, Kathleen Kennedy, president of Lucasfilm said ” “We have a vast and expansive timeline in the Star Wars mythology, spanning over 25,000 years of history in the galaxy with each era being a rich resource for storytelling”.

On the movie front, “Wonder Woman” director Patty Jenkins has been snagged to direct “Star Wars Rogue Squadron”, a new film set within the same universe as Jar-Jar and company, to hit theaters 2023. Cool thing about this one, Jenkins is the first woman director to ever helm a “Star Wars” film.

Unlike “Rogue Squadron”, which will hit theaters (should they still exist in two years), the majority of the other “Star Wars” projects will air exclusively on Disney+. The new fare includes  two spin-offs of “The Mandalorian”: “Rangers of the New Republic” and “Ahsoka”, with Rosario Dawson. In addition, “Andor” – a spin-off of 2016 film “Rogue One” is on the way – and considering it’s already before the cameras, we’ll be seeing it first. There’s also the previously-announced “Obi Wan-Kenobi” series starring Ewan McGregor – which, shocker, will also bring back Hayden Christensen (!) as Darth Vader (!). Cool… or ‘kidding me, right’?

Ahsoka, a new Original Series, starring @RosarioDawson and set within the timeline of @TheMandalorian, is coming to @DisneyPlus. pic.twitter.com/jD8byvNvDP

Hayden Christensen returns as Darth Vader, joining Ewan McGregor in OBI-WAN KENOBI. The Original Series begins 10 years after the dramatic events of Revenge of the Sith, and is coming to #DisneyPlus. pic.twitter.com/9WR2npRUkk

“Everything I did, I did for the Rebellion.” Andor, an Original Series set in the Star Wars universe, is streaming in 2022 on #DisneyPlus. pic.twitter.com/q2IT2qzEeR

Disney+ has also lined up a “Lando” series, directed by Justin Simien, and an animated movie with C-3PO and R2-D2 guiding “a new hero” titled “A Droid Story”.

Lucasfilm’s “Willow” spin-off – though nothing to do with “Star Wars” – was also officially announced at the event.

As exciting as all of this might sound, let’s be sensible here –  we all know what happens when we get too greedy, take on more than we can chew, and exhaust our carrier?

here’s a video to demonstrate :