Like Friday the 13th, Halloween, Nightmare on Elm Street and even Leprechaun before it, any long-running horror franchise must ultimately face the ultimate issue: where do we go from here?

Beginning with the original Wrong Turn in 2003, the cannibal-slasher series found an impressively dedicated cult fanbase in the following decade, resulting in five sequels of varying quality. 2014’s Wrong Turn 6: Last Resort was ultimately the final voyage for the infamous cannibal hillbilly family; the future of the franchise was left uncertain.

Cue a sigh of relief that there’s not only a brand new take on Wrong Turn available now for your spooky viewing pleasure, but it’s also clear that director Mike P. Nelson and screenwriter Alan B. McElroy (who penned the original) have taken great efforts to reimagine the franchise from the ground up.

Backwoods terror and never-jangling suspense meet when Jen (Charlotte Vega) and a group of friends set out to hike the Appalachian Trail. Despite warnings to stick to the trail, the hikers stray off course—and cross into land inhabited by The Foundation, a hidden community of mountain dwellers who use deadly means to protect their way of life. Suddenly under siege, Jen and her friends seem headed to the point of no return— unless Jen’s father (Golden Globe® nominee Matthew Modine) can reach them in time.

Make no mistake; there are still plenty of toe-curling scenes of violence and tension for those gore-hounds out there. But this new take on Wrong Turn is much more narratively satisfying, introducing a brand new antagonistic force which shifts the film from blood-‘n-guts slasher territory into something far more compelling.

I had the pleasure of speaking with actress Charlotte Vega, who leads the film’s new cast of unfortunate travellers.

As a big fan of the original Wrong Turn movies as a kid, it’s pretty exciting to get to talk to you about this new reboot, which takes things in a very interesting new direction.

Charlotte: How’d you enjoy it, as a fan of the original? That was one of our main concerns going into this new one.

A lot, actually! Given that it’s such a long-running franchise, there’s a lot of pressure to do not only something new to justify it, but to also try and please existing fans. What drew you towards the project in particular?

Charlotte: Well, the first time I read it I thought there were just so many twists and turns, I’m sure you’ll agree. It really keeps you guessing and you can’t really guess what’s coming next – or, at least, I didn’t.

I also really loved the character of Jen. I found her relatable, because she’s this average girl going on a hike with her mates, and then everything basically goes crazy. She’s put in these extreme situations where she has to find strength. She does find it within her and she doesn’t know it was there, but she’s not this superhero that finds power out of nowhere.

None of us know how we’d react in such situations, but a lot of us probably would react like that. I probably wouldn’t, I would just freeze on the spot and probably faint from fear [laughs]. I think it’s really cool that she has that evolution, and you do see her finding that strength bit by bit until she can survive.

I appreciate the way she finds the strength to adapt to the harsh environment she’s lost in, because so much of that rural world is about being resourceful and making do with what you have available to you. She doesn’t suddenly turn into this fearless superhero like you say; she does what she has to and it makes for a compelling protagonist.

Charlotte: And I love that, because not everybody would agree with her reaction and her decisions she makes in order to stay alive. They might relate to other characters like Milla. I think it’s really cool that everyone can take away what they choose.

Each of the protagonists have their own reasons for being on the trip in the first place, and for that reason, they all react very differently when things start to go south. Needless to say, there are a lot of grisly scenes of violence and special effects – is that something you’ve been around a lot in your career?

Charlotte: The first film I ever actually did was a horror film, a slasher with lots of crazy, wild, gruesome scenes which I really, really enjoyed. That was my first step into the industry, and the first couple of films I did were horror. I went on to do different things, and then back to different kinds of horror. So it’s always different.

But I really, really love filming horror, because everyone’s so passionate – especially the director, who’s just so into it, and so much blood and gore and it becomes fun. With Wrong Turn, you had all that, you had all the gore, but Mike and Alan brought so much heart to it too. It didn’t just get lost in being a slasher, which I appreciate. 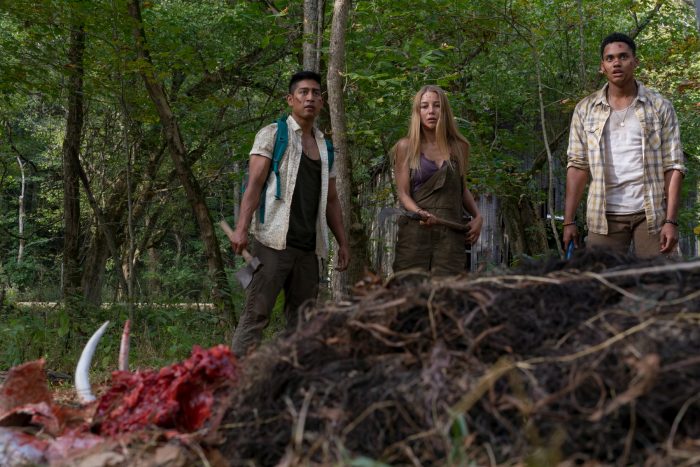 I do love the original film, but there’s a clear desire with this new take to move away from being a straight-forward slasher / creature-feature and actually have a bit more meat to the narrative. Not just being a sequence of elaborate death scenes with a loose plot wrapped around it. I don’t mind that depending on what kind of movie I’ve sat down to see, but it does make for a really interesting contrast.

Charlotte: Yeah, and I do think the original was terrific. Instead of just continuing to do what they’ve been doing with the series, they’ve tried to do something different. That’s what I love, it’s a different kind of film.

What else have you got on the horizon now that Wrong Turn is out in the wild?

Charlotte: Well, I haven’t really been up to much because of COVID. Hopefully, if things go well and it doesn’t get cancelled because of the pandemic, I’ll be back on set again in a couple of months. So it’s been a long year. I’ve been very lucky that I haven’t been hit hard by the whole situation, but I’m excited to be back on set.

WRONG TURN is now available for on demand, digital, DVD and Blu-Ray viewing.