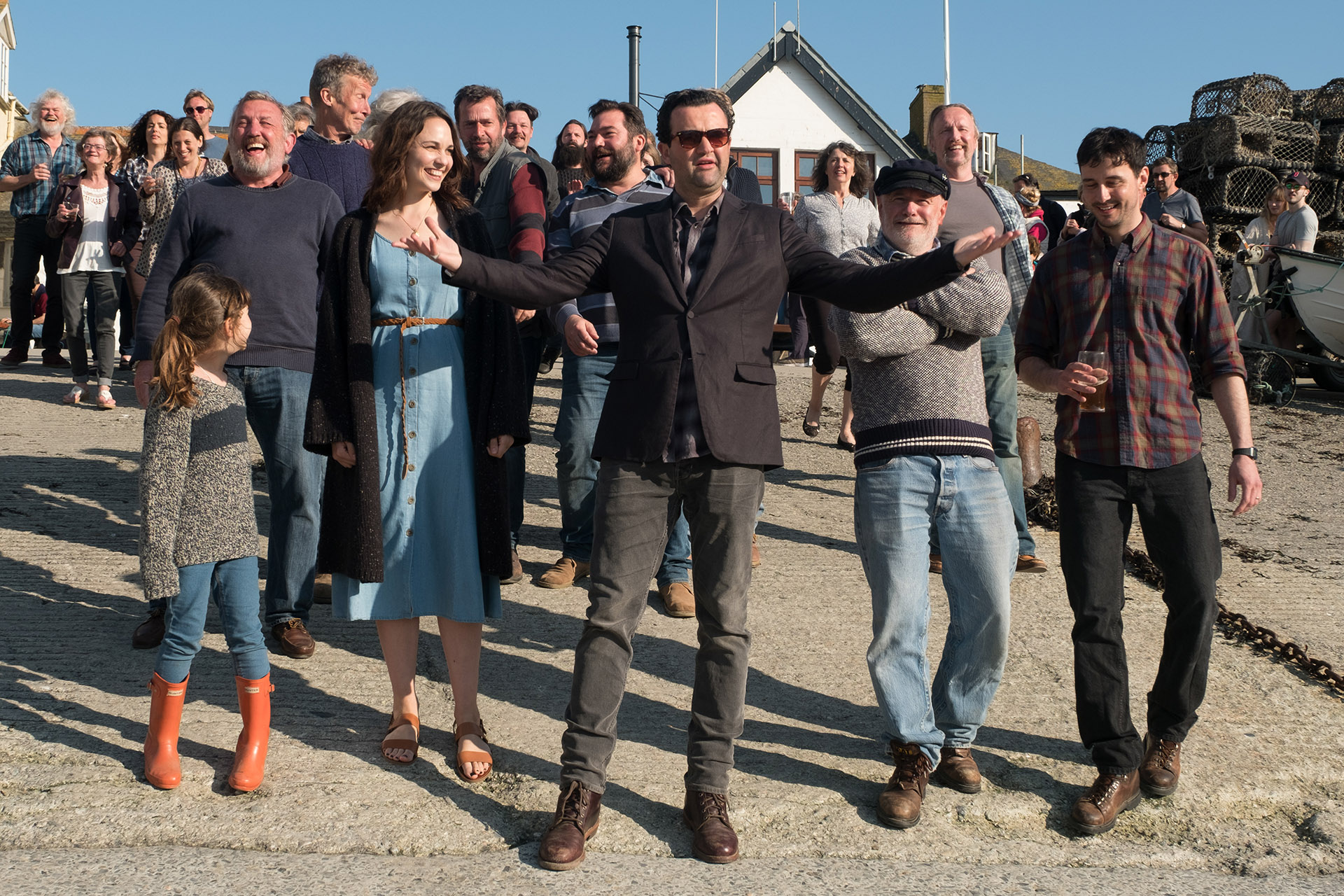 UK director Chris Foggin is not about trends at all.

With his new film “Fisherman’s Friends,” a story about a real sea shanty band in the UK that became famous, Foggin looks to be carving out his own niche of smaller, intimate films that show connections in a wonderful way.

Moviehole was able to have a sit down with Foggin (who just signed with Zero Gravity Management in the US) to discuss about what it’s like filming in Port Isaac (home of the popular UK TV series “Doc Martin”) in Cornwall and how he’s dealing with things during the pandemic.

Moviehole: How did you get started as a director?

Chris Foggin: I basically finished Uni and I was fortunate enough to get some work on as a PA and runner and graduated to an AD; I did about seven or eight years around the world, after that I was making short films. I kind of made a decision to direct a bit more, and I made feature films after that.

CF: I had read the script years before and knew the producer, James (Spring), and I always loved it and wanted to make it. When they came back to me, I was so happy — I was asked to direct it and wanted to do it. The Fisherman Friends themselves were absolutely supportive. Because they were so welcoming, we just wanted them to be happy with the end results.

Moviehole: What were the biggest challenges about making this film?

CF: On a personal level, I was very nervous going out to sea, that was my biggest challenge; thankfully I wasn’t seasick. Now I can’t wait to get back on a boat again!

Moviehole: What was the process of filming out there in Cornwall?

CF: We had to start filming in May and end by May, because there were not too many tourists; the month of May is lot quieter but still relatively busy. In the summer months, it’s SO busy.

“Fisherman’s Friends” was my favorite film experience ever, I had an amazing time and I loved every second; everyone in the village was wonderful, full of knowledge about the place. The fisherman in the band were on hand to offer advice. We couldn’t have been welcomed any more. I had my young family there for about eight weeks. We love London but went from a little flat in London to Cornwall, and when we came back, we talked about moving to the outskirts of London to have more space.

Moviehole: Did the cast and originals make friends?

CF: It was fantastic. We all lived together and the actors had singalong sessions with the band, some of the fisherman took us out on the boat, and in the evening we were welcomed everywhere. It was a unique lovely experience — if you are filming in London, you finish and go home. We’d finish in Port Isaac and go for dinner and go for drinks in the pub and have impromptu singalongs. At the Golden Lion pub, everyone was so welcoming.

Moviehole: Are you still in touch with the original Fisherman Friends?

CF: We keep in touch and I’d like to visit again; we haven’t been able to much because of COVID. We had a little premiere after the film came out in UK and then my second son was born.

Moviehole: What is your directing method?

CF: So my method — I don’t really plan too much, I like to give actors freedom. For example, I like to get on the set with the actors, block it through, get an opinion from the crew, and that kind of dictates where the day goes. I don’t do a storyboard. I see how it feels, I give actors a lot of breathing room, and say ‘so this is what I’m thinking.’ I take it from there, really.

Moviehole: What is your advice to newbie directors getting started?

CF: Just keep making things all the time, follow your heart, tell stories that mean something to you. With the technology available now, I wish a few years ago I had the ability to shoot things on an iPhone. People need new content all the time, so keep telling the stories you want to tell – and don’t rush or panic about things as well.

Moviehole: What message do you hope the audience will take away from the film?

CF: I just hope that in the current climate, I hope people smile and enjoy it, if it makes people smile, that will be best kind of compliment.

Moviehole: What are your upcoming projects?

CF: There is Matt Haig’s modern vampire novel “The Radleys” project. That might be next year; it’s based on the book, I have the script and I’m going to casting it, is the next thing.

I love films like “Finding your feet”; “Love Actually” I like watching every Christmas. My aim and goal is to make people feel good about themselves.

Then there’s “The Other Prince of Wales.” I love that script, hopefully it’s a new project, it’s a great story about family and it’s another project to make people smile. There’s a couple of things I’ve read during lockdown that I really like. And I’ve always wanted to make things out in America, I’ve felt my sensibilities are like “The Spectacular Now,” I’d love to make a US film or TV show.

Moviehole: What’s the atmosphere like during the pandemic in the UK?

CF: We are starting to open up a lot more with pubs and restaurants, it will be hopefully not too long, and the industry is trying to work out how to move forward.