Few movie franchises have had such a fascinating evolution as Skyline. Originally released in 2010, Skyline was an ambitious alien invasion feature with huge-scale digital effects that rivalled some of the biggest blockbusters.

Seven years later, writer Liam O’Donnell took the directing reigns firmly in hand and has since produced two sequels: Beyond Skyline, and the newly released Skylines. The films show an impressive evolution of the series’ DNA each time, shifting from alien invasion to full-on alien action combat with a smooth blend of CGI and practical effects. They’re the kind of movie that doesn’t get made all that often, and it’s clear from speaking with Liam that this comes from a place of love for genre filmmaking and the joy of experimentation.

Kyle spoke with Liam about the process of actively shaping a film franchise, the magic of working directly with artists and where the future of the Skyline franchise might take humanity.

I’m really fascinated by the Skyline trilogy. The arc from the first to third film is impressive, in the way you’ve upped the ante as well as the actual style of film in each instalment. I’m curious as to how that evolution has been for you as a filmmaker throughout the franchise.

Yeah, each one is kind of a reaction. I felt like the first movie was a frustrating thing, because it was so limited on that budget. We wanted to do more action, but we could only really do what we could afford. So for the second one, we wanted to balance the budget a little bit more; maybe spend less on post-production, more in production and make something a little bit more action-driven.

But I feel like my evolution between part two and part three is that, as a first time director, it’s kind of like walking around in the dark. You kind of know what you want, but it’s hard to fully know how to use the mechanics of filmmaking until you’ve done it. I was steering the ship, but I didn’t quite know how to use the jib and everything else at my disposal. So there was this really cool feeling around Skylines when I’d be looking at a scene on set; I’d be able to see in real-time all the things that were going to bug me in the edit and fix them. Shape it all, re-position the camera – boom, that’s it. Got it. Okay, moving on.

I felt like that was the result of the experience, and also just for how long I was in post on Skylines. It’s almost like making two movies, because I edited it for so long and it’s so many visual effects. It was a real education for me. So the more time you get to spend in the edit, the better you get at directing as well.

The Skyline films have such a large amount of visual effects, particularly CGI, but I really do love that there’s a fair bit of practical stuff mix in there too. Is that something you’ve really tried to maintain despite everything being so big-scale?

Yeah, absolutely. Skylines itself is very much inspired from a period of science fiction that’s from about 1985 to the late 90s. Starship Troopers is like, 1997, so about the end of that era.

I’ve been able to work with Amalgamated Dynamics, which is Alec Gillis and Tom Woodruff Jr., on the first film, and I got to work on Alien vs. Predator: Requiem as a consultant. So I got to know them, and we tried to produce a film with a lot of suits in it before Beyond Skyline.

So I’ve caught the bug, for sure. We would have probably even had some practicals in the first one if we weren’t flying so fast by the seat of our pants. That was fully a case of, we’re gonna shoot everything as cheap as possible, as fast as possible, and then we’re going to do the effects.

Of course, practical effects means you need to invest early in the process, and a lot of financiers want to invest later. It’s always hard to get the money in prep. But for Beyond Skyline I knew I wanted to make the pilot characters into more real characters, two main characters.

They were going to be in so many scenes, they had to be practical. So we kind of redesigned them to fit within what a practical performer could do. And then for this one, we kept the same suits and stored them in coffins [laughs]. We cracked them out when we were ready, and we brought them to a great company that creates effects in Spain. They refurbished them, repainted them, cleaned out the nasty linings and really brought them back to life. It’s awesome.

Alan Holmes, who made the suits in both movies, made us the new Matriarch suit which was our new creation. He also came up with the new skins for their legs. In this one we used a different stilt system; if you saw the bloopers at the end of Beyond Skyline, you’ll have seen that the performers were falling over a lot.

They require too much digital work where we had to basically replace the legs in almost every shot that we use them in, so in this one we use a system called DigiLegs and had foam latex skins to put around them. So a lot of the legs in the shooting of this movie are just completely in-camera.

That’s super impressive. Especially that you’re trying to find ways to make it work well not just for the performance, but for the end product on-screen as well.

Yeah, they would say, “oh, it doesn’t hurt!” and they’d fall into a big pillow. They’re not lying, but it does stop your heart when a guy falls from like, a two-foot-tall stilt; especially during an action scene. It can be scary, but it’s always funny when everyone’s okay. 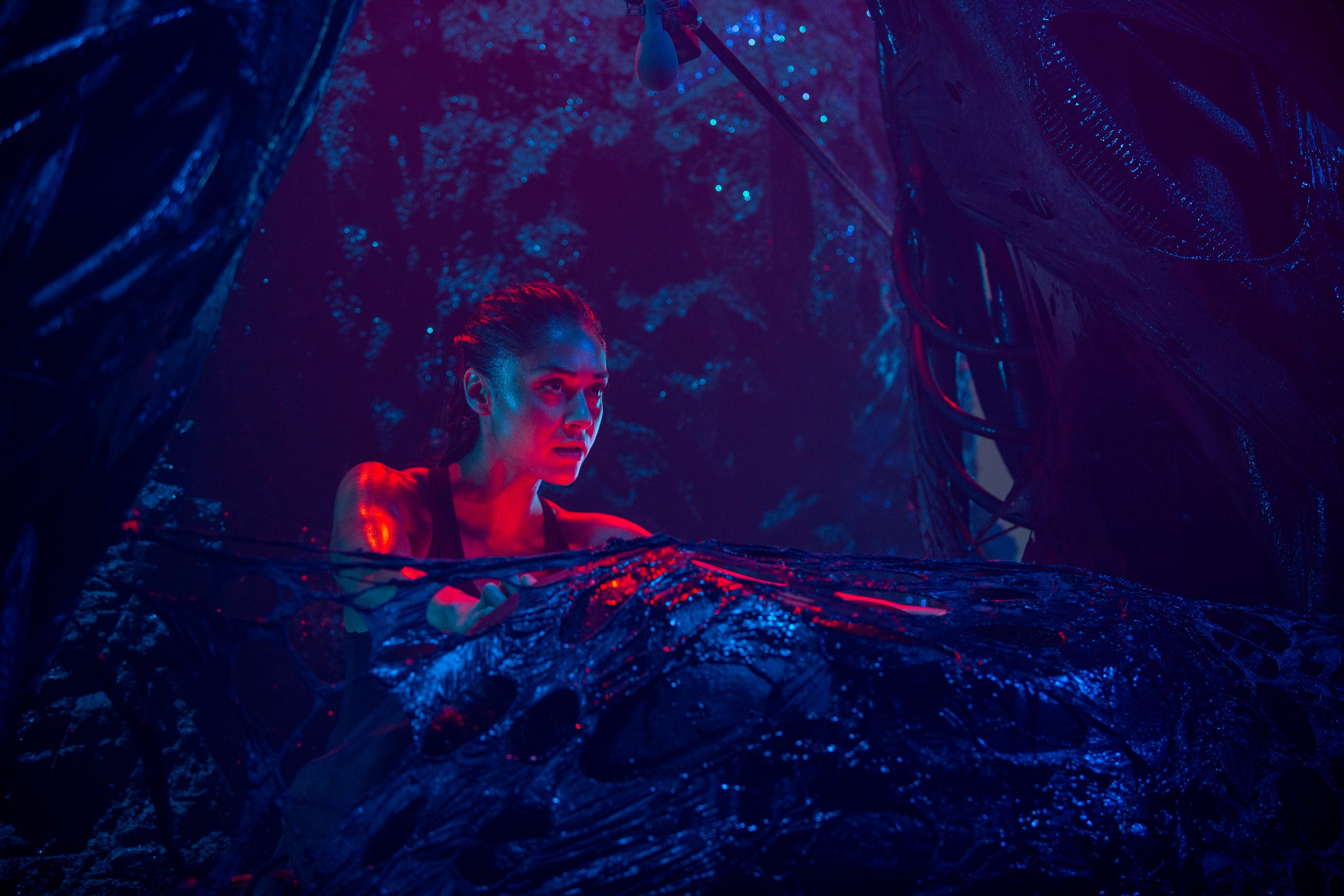 In regards to the different feel of each instalment in the trilogy, is that something that you specifically set out to determine each time you sat down to write the next film? Or is that something you’ve planned out from the beginning?

Each one is like, “okay, how do I make this one different? What’s the jumping-off point?”. Like I said, you kind of react to what was there before. But it’s been an organic process; just following what excites you and what’s hopefully going to excite other people.

For me, the driving thing of Beyond Skyline was “what if John McClane was in an alien invasion scenario?”. And that informs everything, you know, like Frank Grillo being our Die Hard sort of character. In a similar fashion, it was more like “what if a superhero was the lead of an alien movie?”. What if you had someone who was part alien, and they were tasked with going on a mission to possibly wipe them out?

So it’s those kinds of questions that pop in your head that you get really excited to answer, and sit your butt down for months at a time to write and make it really work.

Given that each of the Skyline films has had its own flavour and direction, do you feel like you’d like to tackle something completely different next? Or are you interested in potentially doing another Skyline?

I would love to do something different. There’s a project I’m attached to by a really great writer, called Abomination. That’s a World War 2-set, Arctic creature survival story, which is darker and more mature, but it’s still full of action and excitement.

There’s also another project called The Last Savage that I’ve been trying to get made for the last couple of years; Derek Kolstad from the John Wick films worked on the last draft with me. That’s a post-apocalyptic, science-fiction, martial-arts combat kind of movie. It’s set in these fighting pit arenas in post-apocalyptic Indonesia, years in the future.

So there’s these things that stem from the same love of science fiction and creature and genre and horror, but just on different shades of the spectrum. What’s so exciting about the Skyline movies is that no one’s forcing me to make them any way except the way that we get excited for them.

To come back and do another one – I feel like we’re kind of hitting our stride. I feel like there’s a tone that we reach at the end of Skylines that I think is what I’ve been looking for; the most satisfying version of that movie. So we have the ability to come back and possibly bring back some characters from the past, and throw some new crazy characters into the mix.

They’re just the most fun movies to make. I love making them with the team of people that we’ve assembled. So the challenge is, if we do another one, to make it unique. But I would definitely be up for it.

I’m absolutely looking forward to what does come next from you, because it’s certainly not every day that a filmmaker gets to experiment in that kind of way.

It’s almost like I’m spoiled! [laughs]. Working on the effects, it’s me and Matthew, and I work with the artists as much as I possibly can. I have my own team of artists that work for my company. I love just being able to directly talk to the artists, because I do feel like the effects artists are like actors in a way. You only get so many takes with them. You have a limited time, and they’re just not all created equal.

I feel like people think of it as this commodity, or these goods and services, but it’s artists. It’s art. If you find a great actor like Lindsey, or a great artist like Justin Martinez who did almost every single shot of aliens in this movie, they’re worth their weight in gold. You have to lean on them, and you have this amazing collaboration with them.

To go back to a system where there’d be all these walls up, and I couldn’t directly work with the people that I love to work with, that would definitely be challenging.

Skylines is now available On-Demand and via digital platforms including Apple TV. 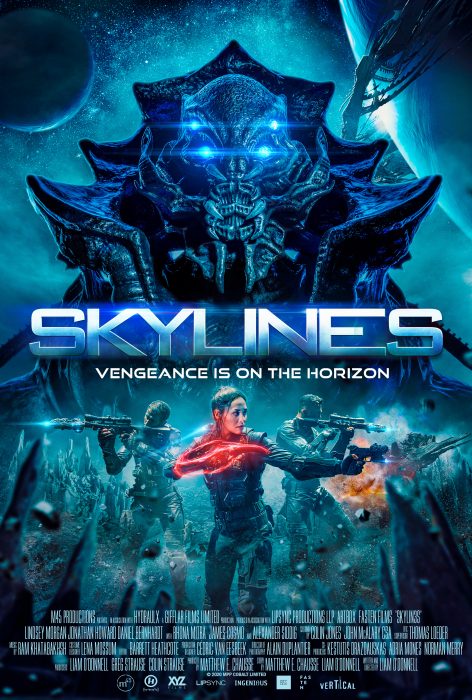