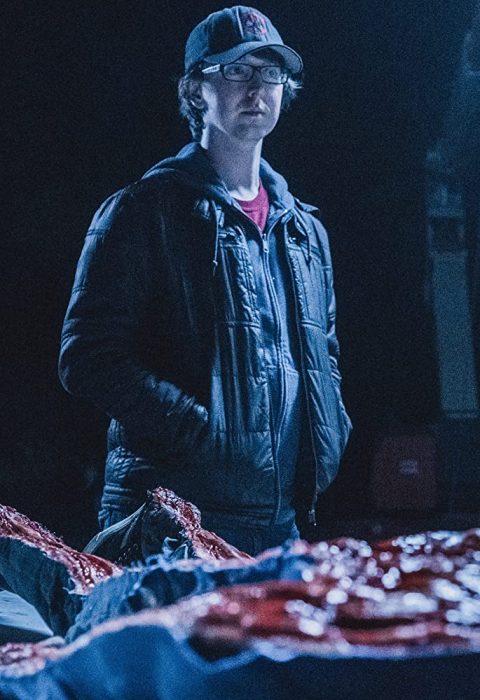 As a member of film production and directing company Astron-6, writer/director/animator Steven Kostanski has had a hand in some of the last decade’s most truly outlandish, strange and entertaining genre films, having co-directed and written the likes of Father’s Day, The Void, and a segment in Ant Timpson’s ambitious horror anthology film ABCs of Death 2.

But Steven’s work as a solo director is equally as drenched in dubious liquids and creature effects, from his feature debut Manborg, the 2018 reboot of the cult favourite Leprechaun horror franchise, Leprechaun Returns – and now, Psycho Goreman.

It’s a wild, ambitious sci-fi / horror / family action-adventure flick; one that can only begin to be described as “Harry and the Hendersons meets GWAR”. The titular Psycho Goreman is an evil intergalactic warlord, who was locked away under the earth by his fellow alien species after he became far too dangerous to allow him to roam the galaxy. But a young human girl, Mimi, unwittingly awakens him from his tomb and becomes his new master thanks to a mysterious gem taken from his burial site.

Wacky E.T.-style hijinks ensue, albeit with hilariously bizarre and gory results. It’s absolutely not for kids despite the young leads, and it’s this juxtaposition that makes Psycho Goreman so fun to watch.

Steven spoke with Moviehole about how he approached the film’s special effects, the creation of Psycho Goreman’s universe and what it’s like to find the perfect kid actors.

Psycho Goreman is a very specific brand of craziness, and I think it’s especially well suited to those who love late-night movie marathons. Like so many movies of that type, there are plenty of gnarly special effects, combining practical and digital techniques. I’m curious as to your thought process behind the balance of the two.

Steven: My gut instinct is to always go as practical as possible. Having said that, there’s a lot of miniature effects and other things that require some pretty professional compositing to pull off.

I think all the best CG effects in the movies are the ones you don’t really see because they’re well-blended. Taking practical elements and utilising them to realise some of these crazy landscapes and practical effects is my number one choice.

I mean, I work in practical effects, doing prosthetics and creature effects. But there’s a place for CG, and we utilise it in this movie for sure.

I always appreciate when a lot of thought and effort has gone into the synthesis of the two.

Steven: Yeah, I think some people just rely on one or the other too much. And really, the conversation should be about what the best approach is for what you’re doing, rather than just blindly saying “it has to be CG, it has to be practical”. It’s best to take the time and figure out what is the best way to tell the story we’re trying to tell.

What was the genesis of the concept behind Psycho Goreman? There’s this fun, coming-of-age story with the two kids, but there’s also a larger universe out there and we get to learn quite a bit about it throughout the film.

I’ve had the images in my brain for a long time. One of the main ones was this big, hulking alien monster sitting at a drum set. I didn’t know what to do with it for the longest time, but I was riffing in my head on the idea of transforming the evil monster creature into a family-friendly adventure film, and mashing the genres together.

It’s like E.T., but instead of them meeting an alien, you have the most evil monster imaginable. Having that within the traditional arc of that kind of family entertainment, I was really entertained by that. Mashing scenes from those two genres together give you a chance to come up with really bizarre scenarios, because they’re really different universes.

That’s where a lot of the humour in the movie comes from, how those things are constantly at odds with each other. But Mimi (the film’s lead) and PG (Psycho Goreman) are actually very similar. PG is the evil overlord of the universe, and in some ways Mimi is the evil overlord of her family and the neighbourhood she lives in. So maybe they have more in common than they’d think.

She’s a great young actress; she really seemed to have a lot of fun with the manic energy the film oozes. What was it like working with someone so young as your lead?

Steven: It was awesome; we really lucked out with our kid actors on this movie. We wrote the script and showed the producers, and they were concerned with like, “yeah, the script is fun and everything, but where are you going to find these kids?”. Because we needed kid actors who could hold their own against the creature effects and the crazy plot of this movie.

We did not need kids that were wide-eyed innocents. We needed kids who were professional, who could handle being on set with a bunch of adults. But also, on an artistic level, we needed them to be able to pull off these types of characters and be charming, not just irritating.

When characters are this broad, they can be quite grating, so we made sure we had actors who were charming and likeable. Mimi, Owen and Scout all fit the bill; they were such professionals who came prepared and were very charming and true to the personality of the characters as well. They didn’t need a tonne of direction, they were fantastic to work with.

Now that the film is out in the wild, what are your filmmaking plans from here? Are you wanting to make something creatively along the lines of PG, or have you got something different in the works?

Steven: During the lockdown of the pandemic, I started getting back into stop-motion animation. So I was doing some little stop-motion shorts. If the world stays the way that it is, I would happily sit in my apartment and do that for the foreseeable future. I did actually manage to plan to shoot four episodes of the Day of the Dead TV series last year.

Right now, the question is, is there a possibility of more PG in the future? I want to wait and see how it’s received by audiences. I would happily dive back into this universe, because it’s so rich and crazy. I think there’s plenty more stories to tell and plenty more crazy places to go with these characters, so I would happily dive back in again if people wanted it.

PSYCHO GOREMAN will be released in theatres, On Demand and Digital on January 22, 2021.