Conspiracy theories are a guilty pleasure of mine; a pleasure because they’re often such fun, and guilty because I’m also a massive skeptic. Whether it’s Mothman, the Skinwalker Ranch or the true identity of Andrew W.K, I love delving into the labyrinth of facts and fiction behind conspiracy theories, even if I don’t necessarily believe in them.

It should be pretty obvious, then, that movies about conspiracy theories are something I can’t resist. The directorial debut of actor Alan Ritchson – who also plays a major role in the film – is Dark Web: Cicada 3301, a hacker-thriller-comedy based on the internet phenomenon of the same name.

When disenfranchised hacker Connor (Kesy), his affable best friend Avi (Funches), and the cunning librarian Gwen (Leslie) discover a mysterious online treasure hunt, they must elude aggressive NSA agents, led by Agent Carver (Ritchson), as the trio race to find the clues and claim their prize.

Dark Web: Cicada 3301 releases Digital and On Demand on March 12, followed by Blu-Ray and DVD on March 16.

I had the pleasure of speaking with Ron Funches, who stars alongside Kesy as Connor’s best friend Avi. I’m a big fan of Ron’s stand-up comedy and voice acting work (Harley Quinn fans will know him as King Shark), his podcasting and that infectious, wonderful laugh that never fails to bring on a smile.

Between your podcast, your appearances on The Giant Beastcast and your comedy in general, you’ve kept me sane and happy through 2020 – so I’m so thankful to get to talk to you!

Ron: That means a lot to me, thank you for saying that.

I’d heard of the Cicada 3301 conspiracy years ago, but never would’ve expected to see a movie inspired by it. Were you familiar with the mythology behind it before working on Dark Web?

Ron: I was not, no. They had to explain it to me, which is surprising because I’m a big fan of conspiracy theories, secret societies and things of that nature. For me to learn about a new one was very enjoyable. But then I was also a little scared that we were making a funny action movie off a possibly real secret society that might try to kidnap me. [laughs]

At this point in the interview, Ron freezes on my screen, I freeze on Ron’s screen, and the Zoom session has to be restarted. 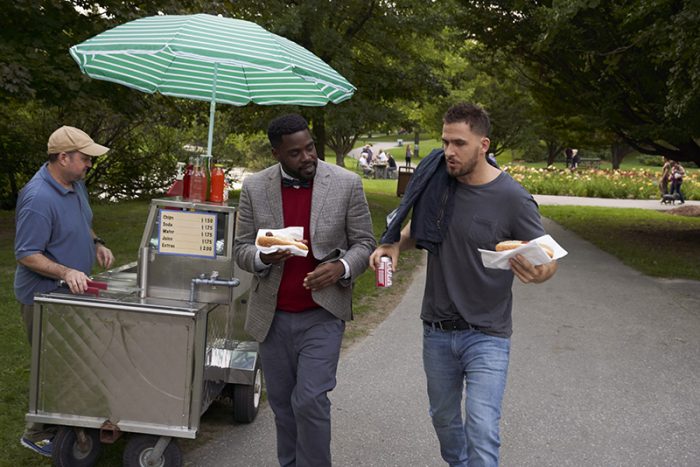 Oh, that’s always fun! They must be onto us, I guess. Getting back to the movie, something that immediately caught my attention is that your character has the most delightful collection of bow ties. I really appreciated that.

Ron: Yeah, I loved it. That’s one of the parts I love about the character; just how whimsical and fun he is, and how kind of similar he is to me. I’m not a big tie guy. If I were to wear a tie, it’s likely to be a bow tie because I don’t like ties at all.

I think that was one of the great things about working with the director. We shot the movie a couple of years ago now, and I had just finished up doing my comedy special. I was tired. I was like, I’m taking two weeks off! And then Alan called me up and was like, how would you like to read for this movie?

I told my manager that any other time, I’d love to…but I’m so tired. I’m taking two weeks off, it’s fine. And then Alan called me directly and said, this part is you. It’s for you. I wrote it after I saw your comedy. I need you to be in it, I just feel that it’d be good for you. He was so passionate and convincing.

This was two and a half years ago, and I wasn’t very confident in acting. I told him, I’m a comedian, not really an actor. And he said, we’ll figure it out!

I’ve spoken to a couple comedians and comedic actors this year so far, and we’ve discussed the idea of transitioning from stand-up comedy to comedic acting roles to even dramatic roles. Obviously, this one’s much more on the comedic side – but it’s interesting that comedians seem to handle that transition pretty well.

Ron: It’s the same thing as how I’m trying to manipulate people into laughter from comedy. And now I’m just thinking, “I can maybe try to do that same manipulation, but with other emotions”. If I can try to make you feel for me or feel sad, there’s a lot of fun in that.

I guess I don’t really have much of a choice, because there’s not much stand-up to do right now. But I’ve really been digging into acting and doing more acting classes, and just enjoying that. I really am starting to love it quite a bit. 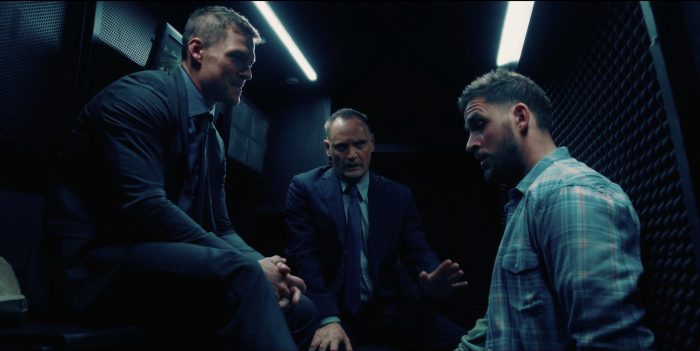 And you have been doing quite a lot of acting. Just in the last few years, you’ve been working on DC’s Harley Quinn as King Shark – who’s just the best – animated feature films and now live-action work. Is this something you think you can see yourself actively doing regularly, or is it still more of an experiment for you right now?

Ron: Well, I just look at it similar to my comedy career. It gives me a barometer of how comfortable and confident I should feel. Right now, I’ve been acting for almost eight years. When I was eight years into stand-up, that was right around the time I was like, oh, I know what I’m doing now. I’m getting this! I’m not the best, but I know what I’m doing.

That’s kind of how I’m feeling with acting right now. It might not be perfect and I still have a lot to learn – it’s such a deep craft. But I’m definitely feeling more confident in it and feel better about it. I try to find more and more roles that challenge me and aren’t just like, hey, come say jokes. I like these types of roles, especially with this one having more action. I also got my first on-screen kiss in this role, so I was very happy.

Man, you’re just stacking up the accolades there! I imagine it’s been very difficult for you not being able to be on the road in the way you’re probably used to. But it seems like you have some good outlets to keep you busy between your podcast and plenty of gaming. I can see your PC in the back!

Ron: Yeah, that’s just the backup rig [laughs]. I just got a new PC with a 3080 (graphics card), so I’m really excited about that. A lot of gaming, a lot of stuff on Twitch, a lot of podcasting on my podcast Getting Better with Ron Funches and other people’s podcasts. I just did a wonderful one called Make My Day with Josh Gondelman.

It’s a hell of a strange time to be alive. But I think some degree of normality is on the horizon. It’s been a slow, slow, process, but you know…

Ron: Slower than one would ever want! But it feels cautiously optimistic.

So what are you working on right now, in any kind of medium?

Ron: We’re getting back to work on Harley Quinn. Season three is on the way, and I also just did a pilot with Adam Devine for a game show that I hope gets picked up. I’m also hosting another show that I can’t talk about or they’ll get mad [laughs]. So just a lot more hosting.

And then I was just in an episode of Black-ish last week, so I’m doing more guest roles and things like that. Just trying to stay busy. At the same time, I’ve been working on writing a show about my son and I, being a single dad with a son with autism. It’s been my passion project for years, so I’m still plugging away at that. 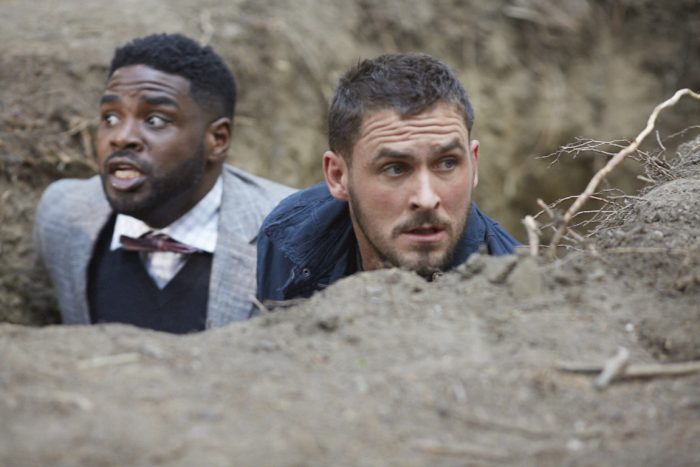 That sounds great. I hope that can come to fruition, because it sounds like it would be really, truly lovely.

Oh, man, all sorts of stuff. I’ve been really busy at the moment with doing interviews and reviews, so I’ve got this big backlog of work to do so I’m trying not to play too much. But I’ve been trying out Valheim and it’s really quite cool.

Ron: Oh, I hear great things about that, but I’ve never been into that type of game. But you like this one?

Neither have I. It’s not necessarily doing anything super innovative or new, but running around and building houses and killing freaky creatures – it does that really well. It’s good fun.

I’ve really got to pick it up. There’s so much good stuff out at the moment!

Ron: Yeah, surprisingly, especially for this time of year. I just got Persona 5: Strikers, which is better than I thought it was going to be, and Bowser’s Fury is amazing. And then Hitman 3, that was a great way to start the year.

You did mention that you have an interest in secret societies and conspiracy theories, and I’ve got to say, if you ever chose to do a podcast about that…

Ron: [laughs] I’ll think about that! As long as I can stay safe and not poke too deep. But that’s not the point, I want to poke too deep. I want to go down a rabbit hole. That’s so fun! Next thing you know I’ve got giant baby heads made of Macramé attacking me.

Fingers crossed that doesn’t happen to any of us. It’s already been a tough twelve months, we don’t need that.

Ron: No. But I’m excited; the movie actually comes out on my birthday, so I’m excited for that. That seems like a good thing, cosmically. Did you like it? Because I actually haven’t seen it yet.

It’s a hell of a lot of fun. It took me by surprise in terms of what kind of movie I thought it would be; it’s very comic-booky which works well. It’s really quite entertaining.

Ron: Yeah, I think Alan really had a good vision. Even when we were taping it – because it’s pretty low-budget and we did a lot of on-the-run filming – when we were acting, we were like, are you sure you got it? Are you sure that was a good take? And then we went back and I saw the trailer and was like, oh, he had a vision for sure.

You could tell he’s studied under Michael Bay and all that stuff. I think Alan’s a director to look out for.

I was really pleased with it. So hopefully you like it, because you’re in it!

Ron: I think I will! I love the trailer. So that was a good part for me. And then I know I kissed Jess, so I’d like to see that again. That’ll be fun. Have you ever watched that show The Boys?

I love The Boys. It’s so good.

Ron: Well, you know, she gets murdered in the first episode. She turns into a pile of goo. I did not know that at the time, and so I was watching it going, “oh, there’s my first kiss!”. She’s so sweet. She was so nice to me and made me feel comfortable. And then BOOM.

Goodbye! Man, what a way to go.

Ron: Yeah, that’s what happens when you try to get over me.