It’s not often you see the same three names listed under the writing and directing credits for a film, unless it’s an anthology. But a little background research on the production of Death Drop Gorgeous – which releases today on digital platforms – reveals just how much of a collaborative effort the drag-giallo thriller really was. 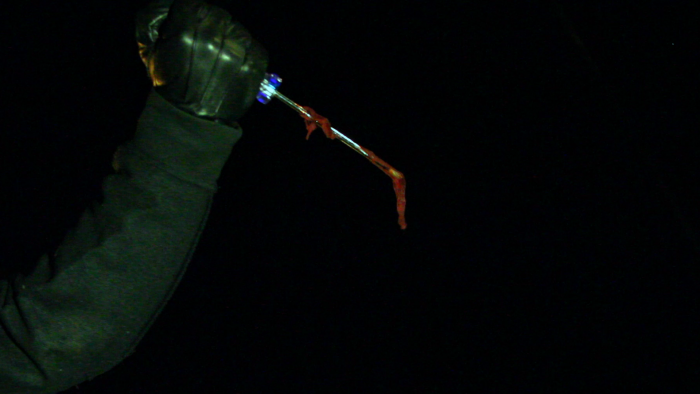 Filmed in Providence, Rhode Island with a local cast and crew – written and directed by the trio of Michael J. Ahern, Christopher Dalpe and Brandon Perras – Death Drop Gorgeous is the kind of plucky independent feature that has enough infectious spirit that one can’t help but appreciate despite its technical shortcomings.

A young, gay bartender’s return to his sleepy hometown marks the beginning of a series of gruesome, bizarre murders of local drag queens and townspeople by a mystery killer who collects the blood of their victims. The film introduces plenty of colourful potential suspects – perhaps a few too many, as the plot loses focus at times and spends a little too long on minor characters to the detriment of pacing.

Nonetheless, there are some sincerely entertaining and likeable characters in this cast – especially Michael McAdam’s over-the-hill local drag legend Gloria Hole, who fends off the barbs of younger talent with cutting disdain; not to mention the frequently silent yet scene-stealing Tragedi, played by Complete Destruction, who should be in another ten of these. And although there are a few too many minor scenes that could have been trimmed, there’s some genuinely laugh-out-loud writing to be enjoyed. Ten bonus points for a very silly Twin Peaks gag I couldn’t help but grin at. 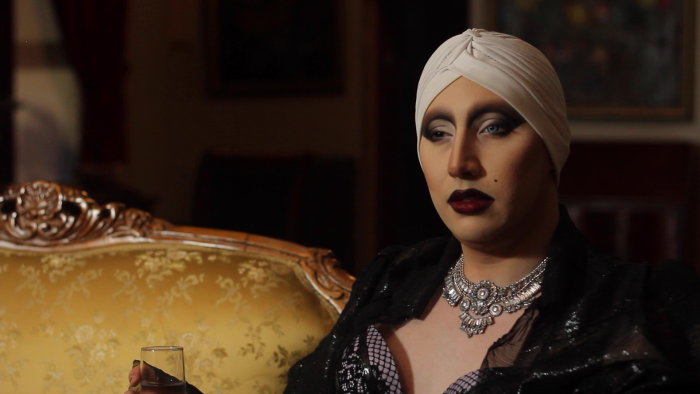 It’s rough around the edges when it comes to the technical stuff, sure – the camera work and audio mixing, for example, leave something to be desired. But fans of John Waters and low-budget queer films like Party Monster, for whom Death Drop Gorgeous is openly a love letter to, may not care all that much when there’s still plenty of fun to be had at its core.

As you’d expect, there are plenty of blood and guts in this camp giallo thriller, and they’re tastefully tasteless and ghastly despite the budgetary restrictions. A particularly horrific death scene involving a portable meat grinder and genitals is a perfect encapsulation of the wicked sense of humour of the film’s creators, who are clearly having lots of dark fun with the concept.

Death Drop Gorgeous isn’t going to land for everyone, especially the small but very loud minority of horror viewers who bemoan the presence of drag or even the mildest of queer themes in the horror genre. But this movie isn’t made for them; if anything, it’s made in open defiance. I would truly love to see what the team behind Death Drop Gorgeous can pull off next with a little more focus and the experience they’ve undoubtedly acquired through its production, because there’s a wicked little spark here.

DEATH DROP GORGEOUS is released on Digital (US, UK, AU and more) – and theatrical (US only) – by Dark Star Pictures September 10.