Chucky will premiere its second season October 5 on SyFy and USA, the networks announced today.

A continuation of the iconic film franchise chronicling the murderous escapades of the notorious killer doll. In the TV series, Chucky crosses paths with archenemies, old allies and new prey, as he seeks to inspire fear and mayhem wherever he goes. After his diabolical plan to invade America’s children’s hospitals was foiled in season one, Chucky now seeks revenge on those he holds responsible: surviving teens Jake (Zackary Arthur), Devon (Björgvin Arnarson) and Lexy (Alyvia Alyn Lind), along with his ex Tiffany, now his sworn enemy.

Paramount+ today announced that its upcoming new adult animated series, Mike Judge’s Beavis and Butthead will premiere on the service Thursday, August 4 in the U.S. and will also be available to stream internationally in all territories where the service is available.

Warrior director Gavin O’Connor is developing a series version of the film with Lionsgate Television, which has made a deal with Paramount+ to develop it. O’Connor is in talks with retired two-time UFC champion Daniel Cormier and Gina Rodriguez to play two of the four main combatants culminating in mixed martial arts matches. [More…]

Epix has released a trailer for “My Life as a Rolling Stone”, coming August 7.

A teaser for the fifth season of The Handmaid’s Tale has been released, coming to Hulu September 14.

Netflix has revealed a new poster for the upcoming “Heartbreak High” reboot, coming soon to the streamer. 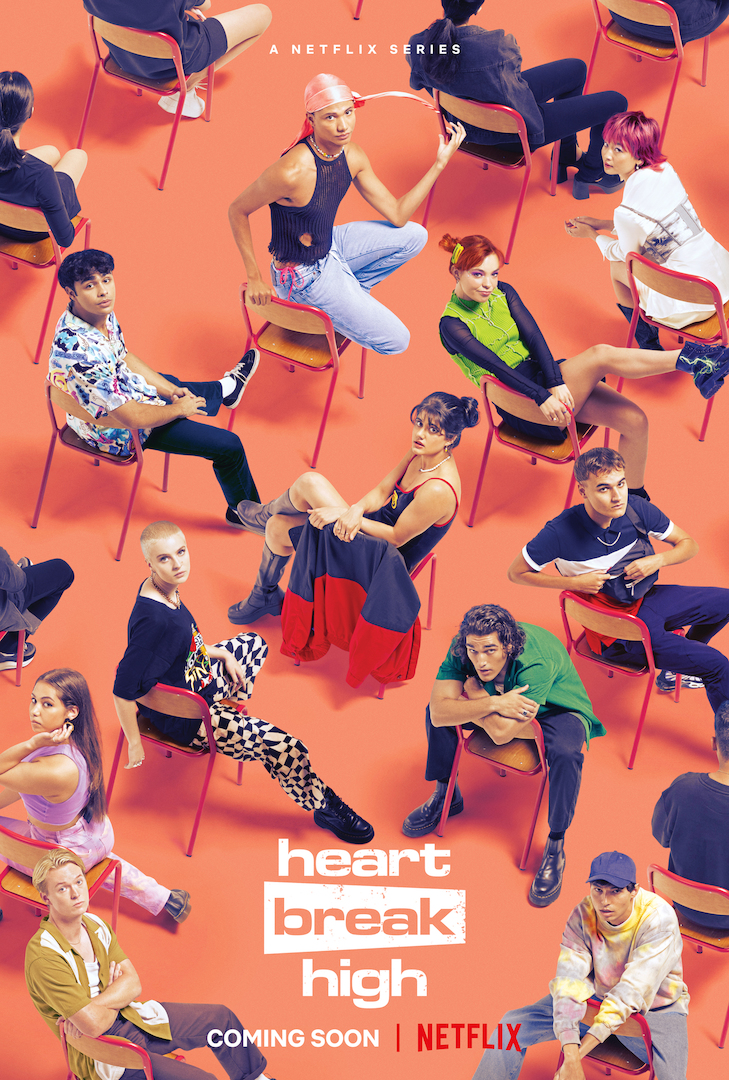 Jim Sheridan’s new 5-part crime series Murder at the Cottage : The Search for Sophie, will premiere on Topic August 4. In 1996, two days before Christmas, French TV producer Sophie Toscan du Plantier was brutally murdered at her holiday cottage in Schull, West Cork. In 2019, the key suspect, English journalist Ian Bailey – the first reporter on the scene – was found guilty in absentia by the French courts yet was never found guilty in Ireland, owing to a lack of reliable evidence. In the true crime docuseries Murder at the Cottage: The Search for Justice for Sophie, Academy Award®-nominated filmmaker Jim Sheridan takes viewers on a journey of the unsolved case that has haunted West Cork for almost 25 years. Piecing together original evidence, never-before-seen footage and interviews with those closest to the case, Sheridan tries to make sense of what happened that night. Having successfully fought repeated extradition requests from the French authorities, Bailey still resides in West Cork and maintains his innocence to this day

Stan today released the official trailer for the brand new drama series American Gigolo, starring Jon Bernthal (We Own This City) in the titular role of Julian Kaye. A present-day reimagining of the iconic 1980 film, the eight-episode series will premiere 10 September, same day as the U.S. and only on Stan – with new episodes weekly.

Stan today announced the acclaimed medical true crime drama series Dr. Death has been renewed for a brand new season. The second season of the anthology series will continue to be based on the hit Wondery podcast of the same name and will premiere same day as the U.S. and only on Stan.

The brand new season of Dr. Death  follows Paolo Macchiarini, a charming surgeon, renowned for his innovative operations that earn him the nickname “Miracle Man.” When investigative journalist Benita Alexander approaches him for a story, the line between personal and professional begins to blur, changing her life forever. As she learns how far Paolo will go to protect his secrets, a group of doctors halfway across the world make shocking discoveries of their own that call everything about the “Miracle Man” into question.

“I am so honoured to have the opportunity to expand the Dr. Death universe with this fascinating story,” said showrunner, writer and executive producer Ashley Michel Hoban. “This season, we go global to explore how institutional failure to protect patients is a universal issue, but there are always heroes standing up and fighting for change every day. I can’t wait to share this story of romance, intrigue, complicated characters, and, of course, the eeriness that is Dr. Death with our fans.”