Montreal’s legendary Fantasia Film Festival is back with a vengeance in 2021. After the success of its hybrid in-person/digital format last year, Fantasia returns with yet another wild and wonderful selection of films and cinematic experiences from August 5 – 25th.

We had the brilliant fortune of being able to speak to the legendary Barbara Crampton, who stars in the latest film from Excision director Ricky Bates, Jr., King Knight. The film follows Matthew Gray Gubler (Criminal Minds) as Thorn, the high priest of a hip Californian coven alongside his beloved ‘life partner’ Willow (Angela Sarafyan, Westworld), who experiences a crisis of identity when his secret past begins to uncover itself. 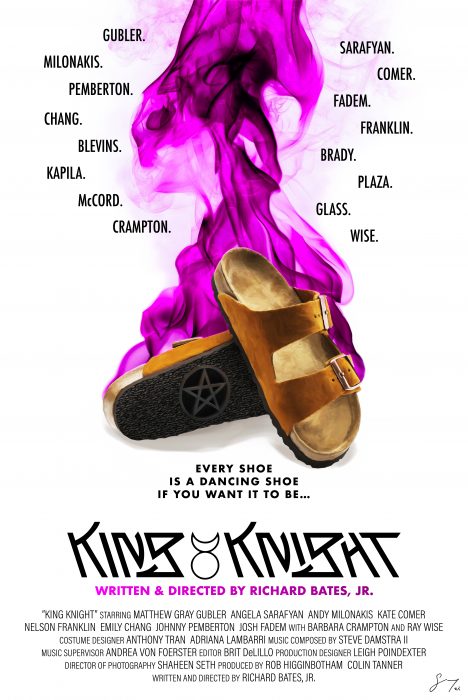 We’ll save the big surprises for the Fantasia premiere, but as Barbara explained to us, King Knight gave the cast an opportunity to defy typecast and have a lot of fun in the process.

The thing that immediately stood out to me about King Knight is how eclectic a cast it has, including yourself. But once you’ve seen it, you can see exactly why everybody was cast in those roles. I’m so interested to hear how you came to be involved in the project, because there are some really great people involved in a way that’s quite out of left-field.

Barbara: Yeah, I was really surprised. I’ve been a fan of Ricky’s for a long time, and I was surprised when I got a call from a mutual friend to say, “Ricky wants to talk to you on the phone, he’s doing another movie and wants you for a part”. I thought, “wow, that’s really out of the blue”.

I mean, his movies – they’re comedies, but they’re very artistic and unique and really different. They have a lot to say and they’re nuanced, and I was just surprised that he thought of me. After speaking to him about it and hearing about the film, and also being able to play a character that’s a little challenged, emotionally – she’s not such a nice character.

I usually get typecast, playing the nicer roles. I don’t mind that – I put myself in that role in Jakob’s Wife, which I produced as well. But I do like to play a multitude of different kinds of characters, and most people don’t actually see me as playing not a nice person. I appreciate that I was given that opportunity, and I really liked what the movie had to say.

I really like Ricky. I love Matthew Gray Gubler, I’m a fan of his from Criminal Minds. These guys were putting the movie together themselves, and I thought the movie had this sweet, fun, comedic and lovely message to be yourself and love who you are, and reconcile your past, present and future. That’s something I think we can all relate to, and I think its themes are really accessible. It was fun for me to step outside the horror genre and also be in a comedy, so I appreciate this for so many different reasons.

That’s something I really appreciate about you as an actor, that you’re always willing to give anything a go from the most straightforward projects to all sorts of bizarre, out-there horror and other genre films.

Barbara: I don’t feel like I ever want to play anything super the same. If there’s not something I can add to a movie, then why do it? I appreciate that some of the more forward-thinking creatives out there like Ricky Bates give everyone interesting and fun characters to play. I think he always does that in his films, so I knew it would be something special when I knew it was a Ricky Bates movie. I was like, “okay, I don’t know what it’s going to be, but it’s going to be cool”. He has such a creative voice, and I was just really happy that he thought of me. 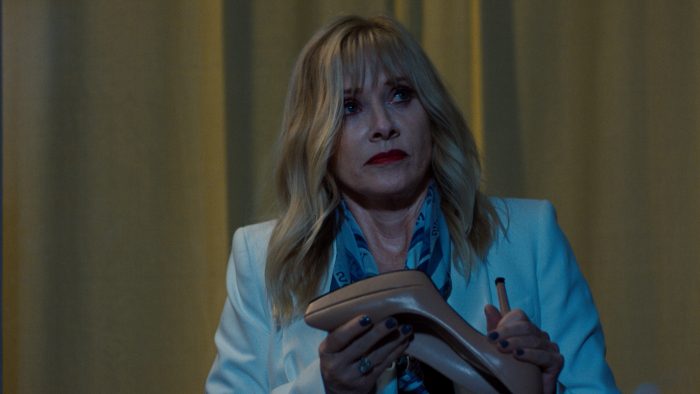 I don’t want to give too much away about your character in King Knight, but the glimpses we’ve seen involve a Zoom call. I’ve been wondering a lot over the past year, given that we’re all having to do a lot of video calls and phone calls to connect, do you feel like having to act out those kinds of calls might have become a little less strange to you?

Barbara: You know, we actually shot this movie before COVID. It was actually on Skype, not even Zoom.

Wow, Skype, what a memory!

Barbara: I don’t even know how to use my Skype anymore, nobody uses that!

I mean, we’re on media all the time. We’re on our phones, we’re on our devices all the time. I think what that showcased was that there’s separation between Thorn and his mom. That’s the only way that they feel safe to communicate, on a Skype call. He hadn’t seen his mother in a while, and didn’t really talk about her too much in his life, so that’s the only way he’s going to feel safe. And even when he comes to her house, he just drops something at her front door and leaves. He’s just not comfortable being around her, and he hasn’t really reconciled his past to his present.

That’s one of the themes of the movie that I think everybody can relate to. I think it showcases that very well that his first communication with his mother in a long time is over Skype.

With films like King Knight and, of course, Jakob’s Wife, you really seem to love championing these smaller, more human passion projects. When it comes to things like Fantasia Festival, there’s so many great opportunities for films like this to find an audience and thrive.

Barbara: I think that’s really important to me, and always has been. Since I’ve come back into the genre in 2011 with You’re Next and had such a good experience working with those guys, Adam Wingard and Simon Barrett, I’ve always felt like I wanted to help young filmmakers realize their dreams. If somebody calls me and says, “I don’t know where this movie’s going to end up, but we’re making it and we have a great part for you”, if I think the script’s good and I like the people involved, more often than not I really highly consider it.

You can check out the movie for yourself at Fantasia!