To celebrate the timely release of the delightful “A Shaun the Sheep Movie: Farmageddon” on DVD, Blu Ray and Digital (guaranteed to keep the kids entertained at home), Moviehole has 10 x DVDs to give away! 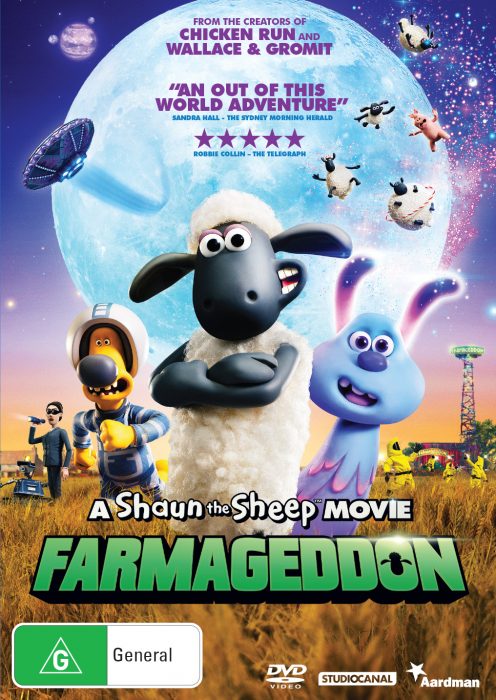 “A Shaun the Sheep Movie: Farmageddon” is a stop-motion animated science fiction comedy film produced by Aardman Animations. Directed by Will Becher and Richard Phelan in their directorial debuts, it is a stand-alone sequel to Shaun the Sheep Movie (2015) and is based on the claymation television series Shaun the Sheep, in turn based on the 1995 Wallace and Gromit film A Close Shave created by Nick Park. The film stars Justin Fletcher, John Sparkes, Kate Harbour and Rich Webber reprising their roles from the series and the previous film, whilst new cast members include Amalia Vitale, David Holt and Chris Morrell. In the film, Shaun and the flock encounter a cute alien with extraordinary powers, who crash lands near Mossy Bottom Farm. They have to find a way to return her home in order to prevent her falling into the hands of the Ministry for Alien Detection.

“A Shaun The Sheep Movie: Farmageddon” is yours to own on Digital now and on Blu-ray and DVD from 22 April 2020.

Simply enter your details below and let us know the name of the other TV show made by the same creators!