Student Body is the feature directorial debut of screenwriter and director Lee Ann Kurr, whose extensive background in classical acting is undoubtedly a boon when in the director’s chair.

The tension manifests in pursuit of and within the group itself, as the troubled teens clash amongst themselves while also trying to escape a masked killer in the high-security confines of their school campus.

I had the pleasure of speaking to Lee Ann Kurr about her background in the arts, the relatable anxieties of high school and shaping the ironic atmosphere of a security-obsessed school with a killer in its halls.

Congratulations on the release of Student Body! It must be so satisfying to get your first feature out into the world.

It is very satisfying. It’s a long road, but it’s worth it.

When I was in high school, I very much loved being on stage and was pursuing the whole acting thing as a young person. Then I came across a wonderful theatre programme in my hometown, which did all Shakespeare – I thought, “oh, Shakespeare? That’s probably lame”.

But then I started learning more about the storytelling, and became really addicted to and interested in being in his plays. I did some apprenticeships and some regional theatre work and internships when I was in college, and several productions in college, and just really loved classical theatre. I love coming from that background, because I feel like it’s a very solid backbone as an actor.

Moving towards being a director, I find that I have a share vocabulary with my ensemble in that I have an ability to see what’s going on with them as performers, and to bring out the best in what they have to offer, because I have a pretty lengthy background in acting myself. Just like the Brits, if you can do the classics well, it translates well to any sort of piece that you wish to perform.

It was an interesting journey, and I think it all flowed very nicely. 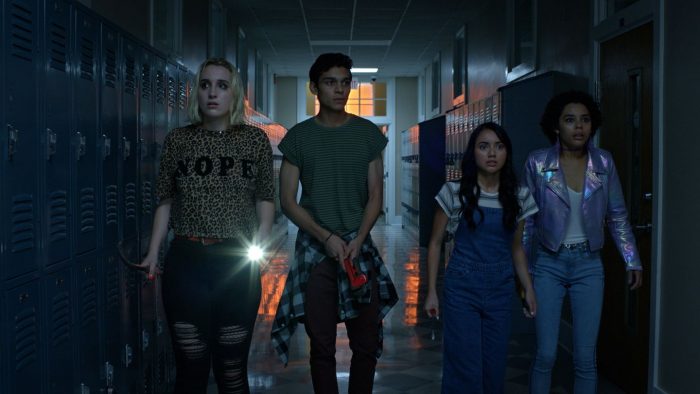 So you went from Shakespeare to a coming-of-age slasher – quite different worlds! How did the idea for Student Body start to formulate for you, was it a project you’d had in mind for quite a long time?

Well, I’ve always loved horror and thrillers. I grew up with Alfred Hitchcock and Agatha Christie, and just loved that kind of mouse-trap vibe of characters stuck in a place and they have to survive – maybe even each other. As well as favourite films like Alien, where there’s a bottleneck situation with the characters. So, I was always interested in that kind of situation.

I had a difficult time, socially, in middle school and in the early years of high school. I experienced some bullying and feelings of social alienation; feeling like I didn’t really know where I belonged socially. I had trouble with some female friendships, and never really felt like I had a firm place where I belonged. I was often very frightened and anxious as a young person.

I thought of using that really salient feeling of feeling afraid at school and feeling like you’re never good enough for your peers, and feeling like you have to achieve all the time. I really wanted to draw upon those intense fears that I felt at that age, and use them as fodder for the genre elements.

I always like to say that with a genre horror film, it’s like it’s in a pot. There’s already these seasonings and ingredients in the pot, and the genre element is the burner. There’s already stuff going on; problems and issues and things that are scary – and whether it’s a serial killer or a monster or a ghost, the genre element is like turning on the burner on the stovetop and bringing it to a boil.

I wanted to have all of those very real and grounded elements of social insecurity and anxieties over performance in school, and letting the genre elements take it to this cinematic hyperbole, if you will.

I agree. When I think of my favourite horror films, or genre films in general, the genre aspect is what might catch your attention. But the ones that have the narrative and emotional substance are often the ones that end up being the most impactful and memorable.

Once in a blue moon, I’ll hear somebody say something along the lines of, “make the most of high school, it’s the greatest years of your life!”. And that’s a really strange thing to say, honestly. When you’re a kid, school is often a terrible time: you don’t really know who you are, everyone else is figuring themselves out, and even the adults are fumbling their way through life. So high school is a logical place for horror.

Yeah, I’m hoping it’s something that a lot of viewers can connect with. I agree with you; most people who have gone to high school in some form, that part of that experience was scary. For whatever reason, there’s a lot of fear that goes on in those years. So, I’m hoping that can be a kind of touchstone for a lot of viewers. 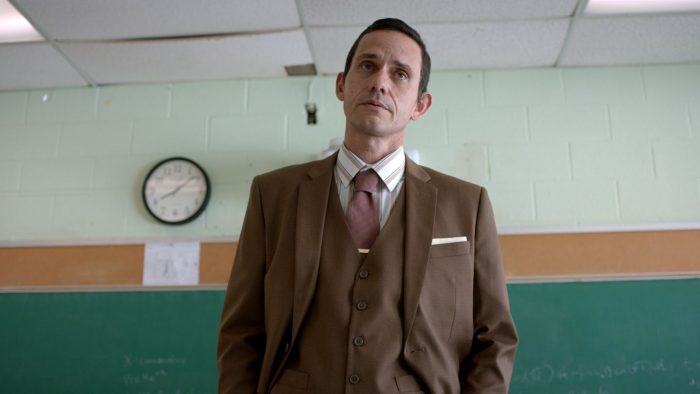 The film’s fictional mascot for the school is a fun character, because he’s a representation of the school’s values and spirit but is also a serious threat. There are also a lot of posters pinned up on campus reminding students of the importance of good attitudes and teachers. How did you go about planning this atmosphere for the film’s setting?

It’s subtle, but when they’re there in the first half-hour of the film, it’s day-time and it’s safe. I wanted little touches, like they’re putting in the new security elements and new locks; little by little, there’s this effort to make the school safer, but it’s also turning it into this fortress that will be used against them.

I think having those little posters everywhere, of Anvil Al saying “wash your hands!” and “teachers are great!”, adds almost a Big Brother vibe, like Anvil Al is always watching you – flipping that script on how this mascot is supposedly wholesome and American and there to remind you to be a good person. It’s actually something that’s associated with the pressures of school, taking over your life and being a source of fear as opposed to something that’s inspiring and jolly.

From a production design standpoint, it was all about shooting these hallways and spaces in a way that feels like they could be claustrophobic. And having these details like posters gives the sense that this figure is watching them before things even start to happen in a literal sense.

For a lot of very topical reasons, high school is an environment that feels safe less than ever So there’s a lot to work with in terms of relatability.

Yes, I agree. I think I was always thinking of the core group of characters as a kind of Breakfast Club for this generation, and the issue is that back then, the worst thing they had on their minds was detention on Saturday. Now, I think the sad truth is that for so many young people, there’s a lot more to worry about than perhaps in John Hughes’ time.

It’s also bringing the diversity that, as much as I love what he did, he wasn’t really bringing back in the 80s. There are also these extra fears and issues of security problems that kids have to deal with, that for most of the time, they just didn’t have to deal with 30 or 40 years ago. So I think safety within schools and having the call come from inside the house, so to speak, is definitely very reflective of things that have been happening. 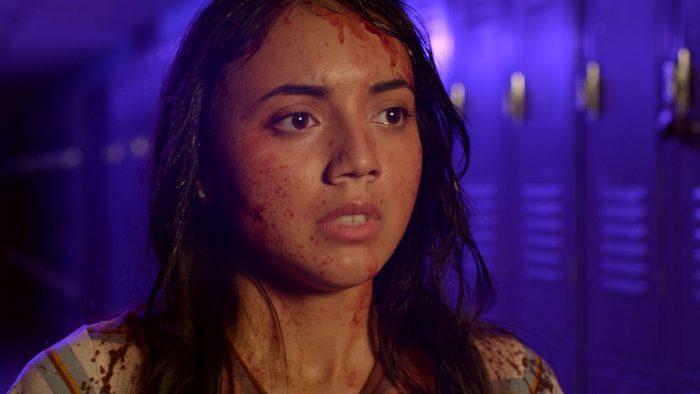 You’ve got some great talent in this cast. Christian Camargo and Harley Quinn Smith in particular have charismatic and commanding screen presences. When it came to casting in general, were there any actors you’d had in mind from the start, or did the casting come naturally as you got a feel for who could embody those characters best?

A mix of both, actually. I think Christian was very high on my list from the onset for the role of the teacher. I had seen his work in a number of places, and knew he would bring that very specific tough that I thought the character could really use. Especially in his role in Dexter – I just thought he was a perfect fit. It was very exciting to get a very top choice for that role.

For the kids, it was an exciting kind of Wild West process. We knew right off the bat, we wanted to make diversity a priority in the sense of not just having five white kids again – we wanted to be very intentional about representing a group of teens as the world actually is. So, we wanted to find extremely talented, exciting new actors who came from different backgrounds and had different stories.

It was a fun process, like when Austin came to auditions. He had just come from Scary Stories to Tell in the Dark. And we were so excited to have him and Harley Quinn. But also discovering some of these other voices and having the other actors really knock us flat with their amazing auditions, like Montse, Cheyenne and Anthony.

So, it was a mix of those two – but with the kids, it was more of a fun, looser creative process of discovering who was bringing the energy of the character naturally to the role during their reading.

What should I keep an eye out for that you’re working on?

I had a wonderful team on this film, so I’m certainly looking to collaborate with similar people to make the next horror film, which I hope to have in the works soon. I’m also currently writing a script for a graphic novel that I hope to having coming out soon as well, which is a coming-of-age fantasy story. We’ll see what ends up formulating first!