Leaving Iran at five years old and coming to California with his family, director Matt Eskandari was prepared as an immigrant to work hard. After graduating from USC, he hit the ground running, as shown by the many films he has worked on since. His new thriller “The Wire Room,” starring Bruce Willis and Kevin Dillon came out Friday; it was his fourth film with the now-retired Willis.

During a round of interviews, Eskandari talked with Moviehole about how being an immigrant kept his attitude positive working in the industry and how Willis always surprised him.

Moviehole: How did you get into directing?

Matt Eskandari: It was definitely something I went to film school for – I was interested in storytelling, my artistic side was very strong, and so I went to USC and did the whole filmmaking aspect which pulled me in. It’s been a journey since then with writing and directing.

Moviehole: Were you creative as a kid?
ME: I come from a background with a mom as a nurse and a dad as an engineer and it was frowned on to do anything artistic, you had to be a doctor or a scientist; so I was pushed to do something technical, we were immigrants from Iran. Then I went to film school and it all came together. The family was saying are you sure you want to do this? I said, yes, it’s worth trying and doing something you are passionate about.

Moviehole: How did you get involved with “The Wire Room”?

ME: I’m at a place with my career now where producers bring scripts to me, saying hey Matt, would this be interesting for you to direct? This script came from a few producers I worked with in the past, it was one of those things – we worked on the concept very quickly, and it was a world I hadn’t seen before – it was an entire film set in a wire room, that was very different, being able to develop chemistry on screen where it’s the characters on a monitor interfacing with each other.

Moviehole: What is the film about?

ME: It takes place with a federal agent who has his first day on the job, he has to surveil a drug cartel member, and the first night things go awry; the cartel member is attacked by guys, and the agent decides to break rules to keep the cartel member alive, it’s a twisty turny thriller where you go down a rabbit hole.

It’s almost a seventies film like “The Conversation” where people surveil you. Now it’s everywhere, your cellphone, we are so bombarded with it now, people don’t realize it. 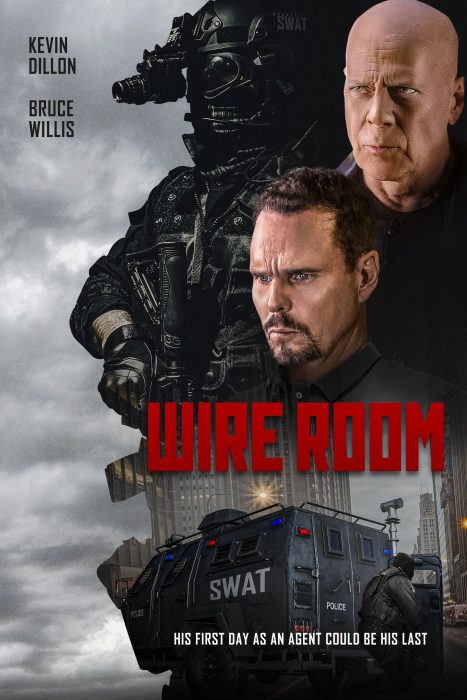 Moviehole: What is your method of directing?

ME: It depends, I specifically love working with actors as soon as possible. Some actors want to improv and others show up and memorize a scene as is; you have to be flexible and find out is this the actor who wants me to reassure him after every take or just show up and do his thing? Bruce is such a good actor and he makes a lot of unexpected choices. Really great actors will read a scene and do something completely different where they will break something or walk into a corner, and it will elevate the scene. For instance, Daniel Day-Lewis is known for this. You point a camera at him, and you have no idea what he will do, right? So you have be flexible as a director.

Moviehole: Where you filming during Covid?

ME: No, we were filming post covid with lots of restrictions in place, so we had to wear a mask and have restrictions every day, we didn’t want to get Covid and shut down production.

Moviehole: Do you have a different perspective on filmmaking because of the different culture where you came from in Iran, has that helped you with filmmaking?

ME: Well, I’m an immigrant so there are the kind of stories with underdogs or outsiders that resonate with me; I think the immigrant mentality gives you a doggedness and persistence, that I’m not going to waste this, I’m going to work my butt off. You appreciate your country and society so much more than what life was like in the homeland, it builds your character and persistence. It’s helped my career for sure.

Moviehole: I’ve been overseas and really appreciate how things are done here as to filming, how about you?

ME: Over the years, I’ve tried to make movies in other countries, and it boggles my mind how much corruption there is in other countries, you have to pay for permits from the government before filming and you start realizing there are things like America and the West where there is a different perspective, like contracts and trust, that’s why things get done here in Hollywood.

Moviehole: What was your biggest challenge?

ME: We didn’t have a lot of days, we had to get all the pages in, and it pushed me a director – it was a really tough movie to shoot. There’s not a lot of crazy action or five characters in the script, so you don’t realize it might be tough, but it was just a few days (seven). We had good collaborators, and it was good in that sense. We shot in Alabama. I really loved it there, it was great.

Moviehole: Who would you like to work with in the future?

Moviehole: What is your success in working so much?

ME: I do think you can’t make a film from a place of ego, you have to work with others and find that place to communicate your vision, you must be open to the idea that others want to work with. Working with people you enjoy working with.

Moviehole: Where do you see yourself in the future?

ME: I’m just looking at things project to project, what’s next. Being in the process of making a film, then getting done with it and being ready to move on to the next thing, I would love to do a bigger budget sci-fi movie or a Marvel film or interesting Netflix show, a bigger budget show. Sometimes the project will find you; like I wanted to do this other thing, but this new thing could open some different doors.

Moviehole: Do you have future projects?

ME: Right now there are a few different scripts and a few producers I’m chatting to, I’m going to take my time to see, I’m waiting for the right script. I’m at a place in my career where I’m not in a rush, I need to find the right project to get me excited. I’ve filmed 10 films, so just being on the set doesn’t excite me as much, the concept has to excite me. Something I’ve actively looking for.

Moviehole: What do you hope the audience will take away from “The Wire Room”?

ME: It’s all about entertainment and I don’t want to beat audience over the head with a message, the audience is paying me to entertain them for two hours, sort of like Tom Cruise, our job is to entertain them; throw them on this journey with twists and turns and bring up some interesting questions at the end.