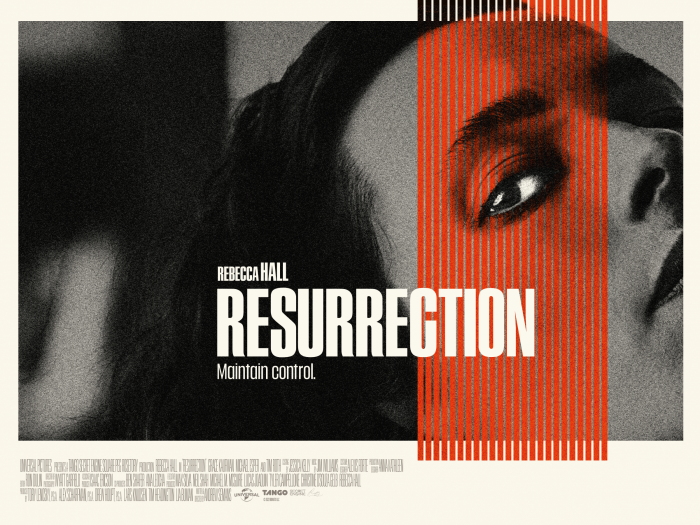 One of the most impactful films at this year’s Sundance Film Festival was Resurrection, the sophomore feature film from writer-director Andrew Semans (Nancy Please). Starring Rebecca Hall as Margaret, successful businesswoman and single mother to a teenage daughter, Resurrection follows the surreal unraveling of Margaret with the arrival of David (Tim Roth), a deeply unsettling figure from her past who refuses to return to the shadows.

We had the pleasure of speaking to Andrew about his latest film, recently becoming a father and more.

Rebecca Hall and Tim Roth are phenomenal in these roles. As director, I imagine you were able to trust them to feel what you wanted from them as performers?

Andrew: Oh, yes, absolutely. They both had a strong understanding, instinctively, of both of these characters. It required very little heavy lifting for me to get them to understand where I was trying to go. They knew what they were doing.

From your first draft to the finished film, did the story change much throughout the process in terms of tone and plot?

Andrew: We went through many drafts, but ultimately, the finished script was not radically different from the first draft. Of course, changes were made, it was developed to be better. But over the course of all the drafts of the script, there were many attempts at different things that did deviate from my original intent; that changed the tone a little bit, that touched on different themes and ideas. But ultimately, it didn’t work.

It all went back to some version of what my initial impulse was. I have to say, thinking back on that very first draft of the script, all the basic elements were there. The ending was there – in somewhat different form – but the main character was there. The situation was there. Over the course of writing a script and trying to get something made, there’s inevitably a lot of trial and error. There are a lot of digressions, but certainly in spirit, it didn’t change much. We stuck to our guns.

I’m always as to whether a filmmaker’s relationship to their film has changed in some way from the early scripting stages to the eventual home release. Does Resurrection still speak to you in the same way that it did when you were writing that first draft?

Andrew: That’s a good question; I’m worried that I’m not going to have a particularly satisfying answer. I would say that now, the parts of the film that most resonate with me in this very moment are not so much the elements about trauma, guilt, self-blame and redemption that run through the movie in a very prominent way. The things that stand out to me now are basic parental fears.

I had a baby four months ago; my first child. When I started writing this script, the first thing that interested me was how terrifying it must be to be a parent. I wasn’t a father then, but I was projecting myself into the future. I thought I would live in a state of constant fear and worry. Constant anxiety. I’ll always be afraid that I will fail my child, I’ll fail as a parent; or my child will be hurt, my child will be sick, something will happen to compromise their health and safety or well-being. And that really was the initial impulse behind this script.

Now that I’m a parent, it turns out I was absolutely right [laughs]. I am constantly terrified. I am overwhelmed with anxiety. I’m also overwhelmed with love, and thrilled at my daughter. But even though that theme was in some ways supplanted by other themes over the course of developing the script and making the movie, it’s something I’ve been thinking about a lot. I feel like I was really prescient, at least with myself. I knew myself enough to know that when I did have a child, it would be something that would throw me into a state of having to be hyper-vigilant at all times to protect this vulnerable thing. That’s how it’s been.

I’m not a parent yet – although I’m hoping to be in the next few years – and I totally understand that instinct. I guess it’s a good instinct to have as a parent; looking out for the worst and the best.

Andrew: I’d certainly rather be excessively worried than negligent. But it does make for a rather intense day-to-day experience. They always say that when you have a child, it’s like wearing your heart on the outside, and that makes you feel so vulnerable. Those are cliches, but they’re absolutely true. I’m so preoccupied with her and her well-being at all times.

Right now I’m talking to you, but I think where my brain really is at is: is she having a good nap? She’s a little sick right now; is she going to recover? Am I doing the right thing? I suppose I’ll be thinking about this for the rest of my life.

In growing older and becoming a father, do you feel the variety of art that you’re drawn to has evolved in some ways; certain kinds of stories that didn’t appeal or make as much sense to you earlier in life?

Andrew: I’ve always been pretty omnivorous. When it comes to narratives, whether it’s books, or films, or plays, I’ve always liked a lot of different kinds of things. It’s not like I’m a horror fan and that’s the primary focus of my attention.

When I tell stories, I tend to gravitate towards thrillers or the horror genre. But when it comes to my viewing habits and my reading habits, I’ve always really preferred a lot of different kinds of things. Since becoming a father, I haven’t found my consumption habits changing much. I’m wondering, however, how it might change the kind of stories I might want to tell in the future. You’d think that when one becomes a parent, you’ll want to tell stories for your children or things that are more palatable to children; or you’ll just become sentimental. Or you want to do things with more heart. That may be the case down the line. My baby is still very young; it’s still too early to tell.

Are there any upcoming projects you’re actively working on or thinking about approaching?

Andrew: I’m going to disappoint you, because I certainly am working on a new future project. I’m trying to get it off the ground – a television project. But I don’t like to talk about them, because the film industry, the film industry: it’s a tough place. A lot of things don’t come to fruition. I don’t like to talk about the details of future projects out of fear that they may not happen.

So I’ll just say that I am very much actively working on things, and hope to get them made! They are in the kind of horror/thriller space. Beyond that, I’m going to keep mum.

RESURRECTION is now available to own or rent on all major platforms.