Based on the short story by Stephen King (though, you’ll notice, King’s story only briefly features the virtual reality element that is so prevalent in the film), “The Lawnmower Man” was a very clever, exceedingly entertaining science-fiction film about a man with an intellectual disability that turns into a genius when a doctor experiments on him. He soon begins to display telepathic abilities and has hallucinations.

A huge hit at the time – unlike its ill-fated sequel – the film featured Pierce Brosnan in one of his first leading performances in a feature film, as well as a scene-stealing Jeff Fahey, Jenny Wright and young actor Austin O’Brien.

Director Brett Leonard, who with Gimel Everett shared screenwriting credit on the 1992 film, says he’s currently developing a follow-up – but there’s legalities preventing him from calling it “The Lawnmower Man 3” or “Lawnmower Man Reborn”, as he explained this week on The Production Meeting podcast on iHeart Radio.

“Lawnmower Man Reborn may become L-Man Reborn. I own the moral rights because its completely my unique story but the guys that own The Lawnmower Man are kind of elusive, and its hard to see who really owns it, so I’m moving forward with L-Man Reborn ‘from the director of The Lawnmower Man, his next vision of a virtual world’. And that world will be a virtual world that will be interactive, first, and out of that will fall the narrative of the feature film.

“It’s much larger scale than the first film. I feel like dystopia’s played out; after Mad Max Fury Road and the last seven months we’ve all been living in I think we’ve got enough dystopia, so I’m turning to utopian storytelling and utopian filmmaking.

Returning characters will include a grown-up Peter Parkette. 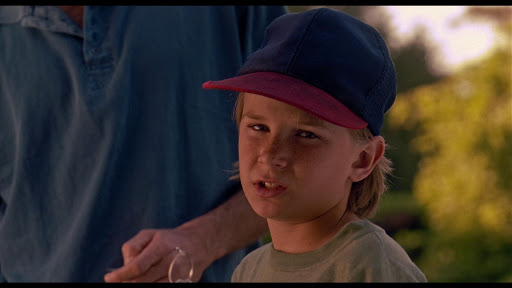 “It involves the characters from the first Lawnmower Man – the young boy (played by Austin O’Brien in the original) is grown up, he’s become a cyber warrior and was, of course, a veteran of the cyber war with China – that all took place in virtual reality.”

Leonard, whose other credits include Marvel’s “Man Thing” and the upcoming “Triumph” starring Terrence Howard and RJ Mitte, says this isn’t the first sequel to his 1992 hit he’s penned.

“I wrote a script called Lawnmower Man 2 : Mindfire. Pierce [Brosnan] was going to do it. They said ‘I’ll give you eight million to make it.” I said “I made the first movie for eight – I need to top that, I need twelve.” They ended up spending eighteen with this guy Farhad Mann.. who was a commerical director and it destroyed the franchise.”

Leonard also has an idea for a “Virtuosity” – his 1995 sci-fi thriller starring a young Russell Crowe and Denzel Washington – follow-up that he has discussed with Paramount.

“I was just talking to a guy at Paramount, who were there at the time, about that. What I’d like to do is take a lot of into VR, then we could use young versions of Denzel and Russell – as well as the old versions. We could cut between these two different versions in the universes. I think we could do a great story. Thing is, you see, Virtuosity is only just timely now. It was a bit ahead at the time.”