34 years ago, rising Aussie star Bryan Brown (“The Thorn Birds”, “A Town Like Alice”) joined some of the other more successful mid’80s’ exports like Paul Hogan, Vernon Wells and Mel Gibson, by booking a one-way ticket to Hollywood to try his luck. Over the course of a decade, the Panania-born actor scored sizeable, memorable roles – most of which allowed him to keep his distinctly strong Aussie accent – in the likes of Roger Donaldson’s “Cocktail” with Tom Cruise, “Blame it on the Bellboy” with Dudley Moore, “Tai Pan” with Joan Chen, and the acclaimed “Gorillas in the Mist” with Sigourney Weaver. He also managed to snare his own popular, though short-lived franchise – “F/X”.

Produced by Orion Pictures, and directed by Robert Mandel, 1986’s “F/X” saw Brown fittingly cast as a cheeky, straight-talking special effects man who gets in over his head when he agrees to fake a murder for – who he assumes are the good guys- the police.

The film, which teamed Brown with Brian Dennehy, opened in theaters on Feb 7, 1986. Reviews were good to very good (it currently stands at 88% on Rotten Tomatoes) and the box-office, though nothing staggering, satisfied Orion enough they were willing to lay down some coin for a sequel.

“F/X 2” followed five years later – then, quite a delay for a sequel – and reunited Brown’s Rollie Tyler and Dennehy’s Leo McCarthy. The formula still worked, though proceedings weren’t as exciting as they were back in the late ’80s. Still, ‘Rollie’ remained a favorite with cinemagoers – and still does.

Here’s 10 things you might’ve not known about the “F/X” series :

1. Orion Pictures never liked the title – feeling the movie would’ve performed better at the box-office had it been called something else.  “We had to accept the title because the producers were very keen on it. They thought the two letters together would be provocative, like ‘M*A*S*H.”. – Charles O. Glenn, executive vice president of advertising, Orion Pictures, told The New York Times.

”I think we made a mistake,” said the co-producer, Jack Wiener. ”When you’re making a movie, the special-effects department is listed on the call sheet as F/X.” 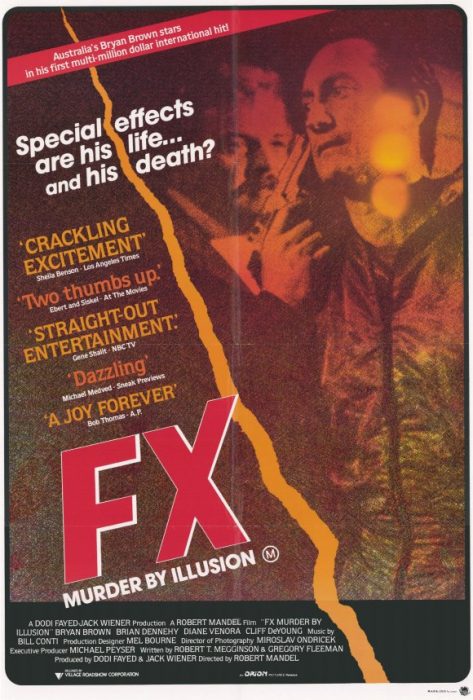 2. Shortly after the release of “F/X” in 1986, NBC approached Orion Pictures to do a pilot based on the film. It never came to fruition.

3. Years after the release of both films, at which time Orion Pictures went broke, a Canadian company produced a TV series based on the property for CTV. Playing Brown’s role? Fellow Aussie Cameron Daddo.  “F/X : The Series” ran 39 episodes.

4. John Stears, who did the special effects for the film,  said that the government had approached him at different times to do various things like Rollie is hired for in the film.

6. Dodi Fayed, who died in the car crash with Princess Diana, was a producer on “F/X 2”.

7. Special effects artists were pissed off with “F/X 2” when it was released because they thought the film gave away too many trade secrets.

8.  After “F/X  2”, director Richard Franklin decided to pack his bags and return to Australia.

9.  The only person that returned for “F/X 2”, aside from the leads, was Josie De Guzman reprising Marisa Velez

10. Remember the catchy end credits song? “Illusion” performed by Imagination, was sampled on P.M. Dawn’s 1998 single, “Gotta Be…Movin’ On Up”. You might remember the latter from the Marlon Wayans’ film “Senseless”.