Though rumors have been circulating for quite a spell that Lynch and Frost’s seminal, groundbreaking series – which returned to the air in 2017 for a belated, most fabulous third season – could be quietly gearing to shoot a fourth season, nothing has materialized. If something was in the works, it’s likely on pause due to the pandemic.

Lynch, who hosts a daily weather report on a YouTube channel each day (and how are YOU keeping busy during iso!?), tells The Daily Beast “there might be things coming along that would mean less time could be spent on the channel.” The David Lynch theater, a video channel Lynch runs with “TP” producer Sabrina Sutherland, boasts some of the filmmaker’s short films and predominantly, his weather reports.

Lynch most recently collaborated with Netflix on a couple of short films – – and earlier rumors suggested the famed filmmaker had been greasing the wheels on a new series with the network. Those rumors suggested “Twin Peaks The Return” castmembers Laura Dern and Naomi Watts were involved in the series.

If the new project is indeed a fourth season of “Twin Peaks”, it shouldn’t be too hard to convince the supporting cast of the series to return. In a new group interview on The Production Meeting podcast, several cast members spoke about a possible fourth season – all indicating they’d be glad to do it.

(on the same podcast, Clark Middleton spoke about his scenes with Sherilyn Fenn’s Audrey on the series, declaring that he does know what’s going on with Fenn’s sassy heroine on the most recent season. See here).

There’s a lot of folks that would like to see Lynch & Mark Frost’s groundbreaking series return. For starters, Showtime – they saw a huge spike in subscriptions when they premiered “Twin Peaks : The Return” two years ago. They’ve also made a pretty penny on merchandise, not to mention continually keep the fan base alive with their social and online presence for the 2017 revival. Of course they want more “Twin Peaks” — and it’s likely they’ve been trying to entice Lynch & Frost into writing more since the end of that first, critically acclaimed run.

Lynch has been non-committal. Sure, he’s said he may be interested in telling more of Carrie Page’s story (that’s Laura Palmer in the alternate timeline), but he’s also said it would take years to put together.

Basically, it didn’t seem like it was something he was “that” keen on, not at this point in time anyway.

Over the past year there’s been quite a few rumours regarding a fourth season of “Twin Peaks” – some plausible even.

It started when the following twitter account started dropping hints that another season was on the way. If you look back, seems they’re quite reputable. They don’t seem to post unless it’s to yak about something of note, let alone legit.

Then, actor Michael Horse – who plays Deputy Hawk on the series – dropped the following on Instagram. 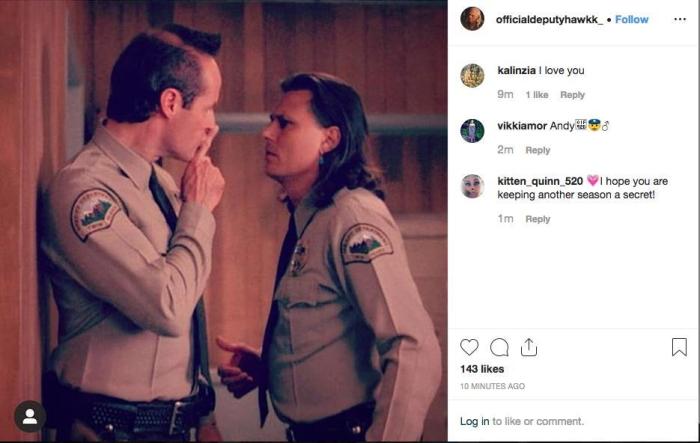 If “Twin Peaks” is returning don’t expect the Red Room to be back open for visits for at least a year or two – these things take time to film and with the pandemic, everything seems to be off for quite a while.

Continue Reading
You may also like...
Related Topics:featured, Twin Peaks