Our coverage of this year’s Fantastic Fest continues as we chat with Kyra Elise Gardner, whose feature directorial debut “Living With Chucky” delves into the legacy of the infamous killer doll and her own, very unique relationship to the franchise. 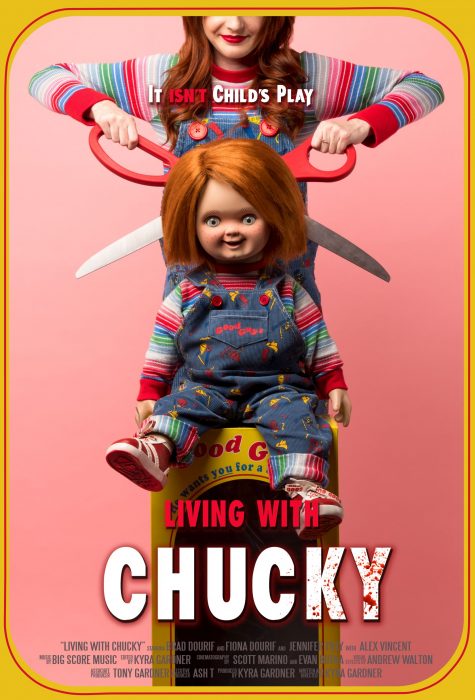 When a childhood doll became possessed by the soul of a serial killer in 1988, Chucky slashed his way across the silver screen and became one of the most terrifying and well-loved horror movie butchers of the ‘80s. Now, with eight movies under his belt and a currently airing television series, Chucky is ready for his next project: a documentary about his legacy.

LIVING WITH CHUCKY is an ode to a horror franchise and a movie monster icon directed by Kyra Elise Gardener, the daughter of one of Chucky’s longtime visual effects supervisors. Having grown up with a Chucky doll in her home since childhood, the filmmaker recounts the behind-the-scenes process of bringing the doll to life as well as the cultural impact of Chucky and his bloodthirsty family on modern horror.

The film explores the idea that the “Chucky” films and the people involved in their creation have always been present in your life in some way, but there’s always been a level of disconnect that you’re now starting to fill in as an adult. How has it been for you to fuse your childhood perspective of it all with being an adult?

Kyra: Coming into my twenties, man am I coming to new understandings of lots of things from childhood! [laughs]

It’s very interesting to experience this as an adult now. It’s exactly what you said; it was like a disconnect in that – I don’t know if I would call it resentment – but this franchise, when I was younger, was this thing where if Dad was going to go do Chucky, that meant Dad’s going to be gone for several months at a time. Awesome.

It was just this thing that took time away from home. Now as an adult, I realize his side of it as well. I was a little selfish and was like, “my dad’s leaving!”. Not only that, he was leaving my mom behind, and my siblings, being in a different time zone, feeling alone. Now, working in the film industry myself and traveling for work, my god is it lonely. It’s having a very different perspective as an adult, and now getting to meet all these people who have been these names throughout my childhood and how much they care about it – but also care about each other.

I just feel very grateful that while feeling separated from his actual family, my Dad and everybody else had this second family they could reunite with. It was actually something quite beautiful forming over the years that I maybe felt was a negative thing from my perspective. But it’s this beautiful family that’s been forged over the past twenty, thirty years, and I’m now integrating myself and just exploring that. It’s so wonderful that that organically happened. Exploring this thing led to me being involved in it, and meeting these people and getting to see them more often. It’s been such a full-circle moment from my childhood.

It’s incredible that you’ve been able to do that. I have family who’ve been in the film business, but it was before I was even born that they were really in the trenches. So I’ve heard all these anecdotes, but it’s not an on-going thing so much. Your parallels to Fiona (Dourif) are quite remarkable; having both grown up watching your fathers be killed on-screen. It must be truly surreal to bond over that!

Kyra: Yeah. It is interesting, too, because Fiona is a bit older than me. But I didn’t realize that Brad started voicing Chucky when she was around the same age that my dad started puppeteering Chucky. So it’s a very parallel universe. It’s so interesting to have this isolated experience of having my dad ‘die’ and discovering it in this awful way, and then find out Fiona also had that going into the ADR booth with her dad screaming that he was being burned alive. I snuck a DVD of “Seed of Chucky” to a friend’s birthday party and watched my dad get decapitated when I was seven or eight [laughs]. I definitely was convinced he was dead for a minute. I thought I was unique, but Fiona and I have that shared experience, which is so wonderful.

The film also talks about the community aspect of horror being quite unique, and those shared or parallel experiences are totally a part of that. Growing up, my knowledge of Chucky was going to the video store and seeing VHS boxes with his face and thinking he’s absolutely terrifying. When I hit my teens and finally watched a Chucky movie with “Bride of Chucky”, it was a totally different perspective, and I enjoy him all the more as an adult. It’s wonderful that you’ve been able to not abandon those childhood memories or perspectives, but recontextualize them in such a meaningful way.

Kyra: It’s very expensive therapy, basically, making the documentary [laughs]. It’s a new-found perspective without forgetting what my perspective was at the time, for sure. It’s also very surreal watching home video footage that we found and putting it in the documentary. I don’t necessarily remember being super young, but I remember those earlier years and missing my dad at the time. It’s so cool to watch it as an adult. It’s weird watching myself, but it’s a new context. And the same for the franchise: it’s always growing and learning.

Has making this film inspired you to delve into other parts of your dad’s work over the years, or something in a similar vein?

Kyra: I started this as a short film first, in college, and it was a seven-minute thing. It already kind of inspired me. I mean, my dad always inspires me, but particularly diving into how Chucky operates and puppets. I’ve always loved stop-motion or any Guillermo del Toro movie that has crazy practical effects. So for my senior thesis in college, I made my main character a four-foot-tall animatronic fish puppet. We borrowed some of Chucky’s animatronics for it, which was so fun. So it’s definitely already been inspiring me to dive into creating things like that.

Honestly, the reality that I lived as a child – and that I still do now – is not reality. I tend to write things that other people probably aren’t thinking about. I don’t think other people in college were thinking of making their thesis with a puppet as the main character, but that’s possible in my mind. My whole reality growing up was monsters and aliens and dead bodies all over the place, so it’s already shaped me so much. It’s been so much more fun to dive into it fully as a director and getting to work with my dad a bit more.

It’s cool to have that creative basis to work from.

Kyra: Yeah, exactly. I feel very lucky and privileged that, as somebody who loves horror so much, I got to be surrounded by it as a kid. Maybe in some aspects I’m not so grateful for it – some drama here and there – but I feel so lucky that I have my dad as my dad. That’s why I really wanted to go into directing.

I hope to go into narrative after this, and direct horror. He’s really what inspires me, because I don’t think SFX artists get enough credit for what they do. And some people who don’t necessarily know how to direct that stuff don’t put aside enough time or other things to really let that work shine. So I can’t wait to hopefully step into that role and create that space for artists.

Speaking from the audience perspective, the demand is totally there. It might be a niche market in the big picture, but when the effort is put in, it’s noticed and it’s appreciated.

Kyra: Exactly. That’s the testament to the “Child’s Play” franchise – the heart and care for that character has always been at the forefront, and everybody has put so much into the franchise, consistently, for thirty-five years.

Even when budgets are cut, and teams change around, the core elements are always there for “Chucky”. And I think you’ve captured those elements well.

Kyra: Thank you! It’s nice to give horror fans something back for a franchise they love so much, and hopefully give them some new insight that they maybe didn’t know before.