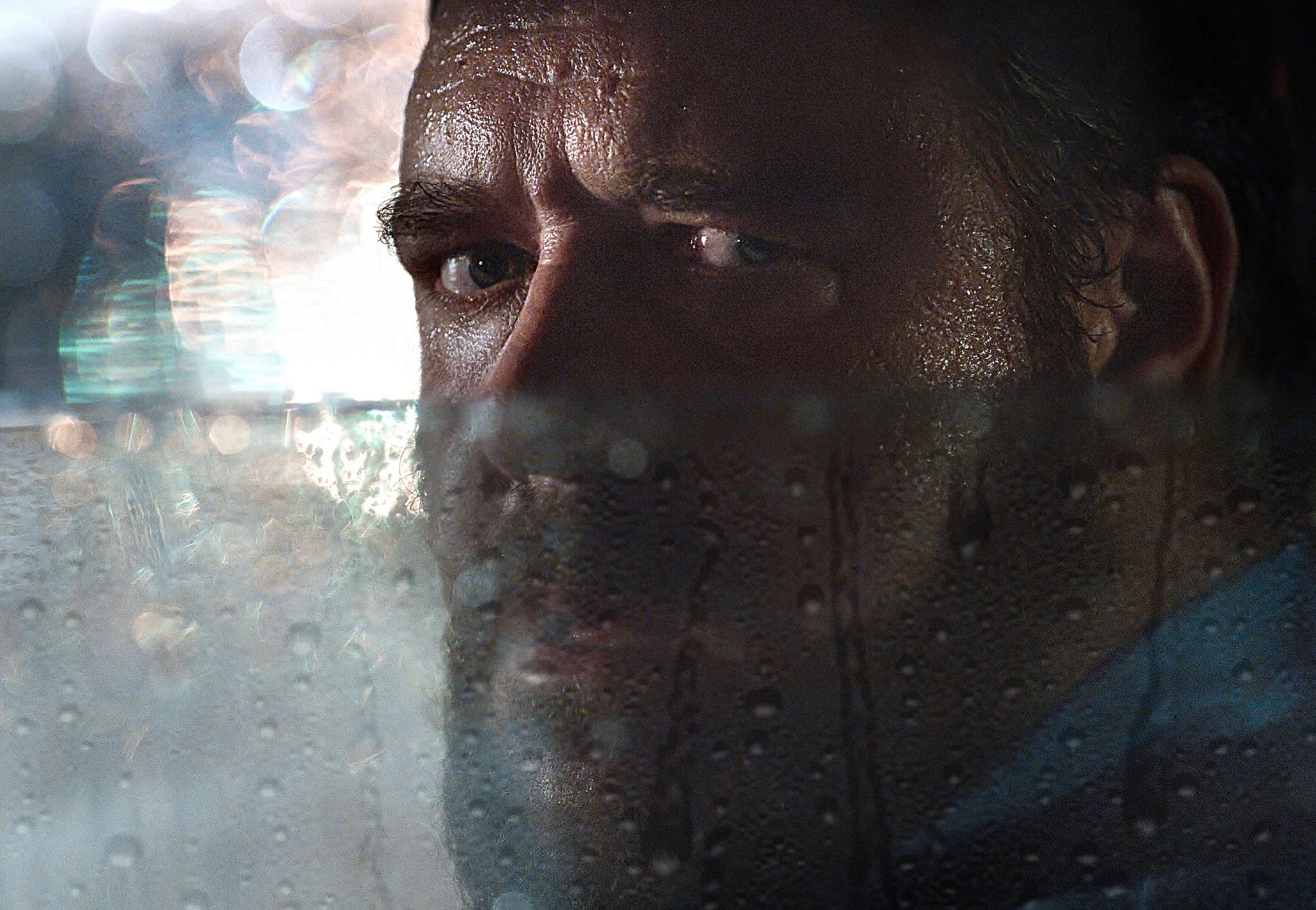 On the horn. How about you?

On a dark rainy night, Tom Cooper (a beefy and never better Russell Crowe) sits in his truck outside a darkened house. He removes his wedding ring and tosses it behind him. After striking a match and letting it burn down to his fingers he grabs a hatchet and a gasoline can and makes his way to the front door. Soon, the occupants of the house are dead and the home is in flames. Tom, it seems, is having a bad day.

Rachel (Caren Pistorius) is awakened by a call from her attorney. Her soon-to-be-ex-husband is asking for more in the settlement. Realizing she is running late (she needs to take her son, Kyle (Gabriel Bateman) to school and has a business appointment) she hurries out the door. Making good time she finds herself behind a truck at a red light. Rather than giving a courtesy tap on the horn, she blares her impatience. Then she does it again. As the light begin to change to red she speeds around the still unmoving vehicle. Rachel is about to have an even badder day.

A thrill-ride of a movie that keeps you on the edge of your seat, “Unhinged” displays its opening credits over images of social unrest and images of people acting out angrily while snippets of newscasts decrying the current situation in the world are broadcast. Though obviously filmed some time ago, the film could easily be set today. Tom tracks Rachel down on the road and asks for an apology. She refuses, informing him that she is having a bad day. This triggers the bottled rage in Tom (we learn later that he too has been divorced) and what could have been settled with a sincere “I’m Sorry” soon becomes a tragic story with innocent bodies left it its wake.

I was introduced to Russell Crowe through his performance as the nasty skinhead Hando in the film “Romper Stomper.” Other roles, like the quick tempered Bud White in “L.A. Confidential” and his Academy Award winning performance as Maximus in “Gladiator” pretty much cement him in my mind as the one guy in Hollywood you would never want to piss off. Tom Cooper is no exception. With his soft spoken manner and quiet tone, the rage built up in Tom seeps through his eyes, making him one scary guy. As Rachel, Ms. Pistorius has a quiet toughness that allows her to stand up to the physical and emotional torment she is being put through. Young Mr. Bateman is equally strong, portraying a real teen-ager who is both frightened and resourceful.

Director Borte, who directed and co-wrote 2018’s outstanding “American Dreamers” keeps the action moving and doesn’t miss a beat in building up the audience’s suspense.