As hinted by a listing on Aussie cinema websites earlier in the month, Sony has officially moved superhero sequel “Venom : Let There By Carnage” from September 24 to October 15.

So, only a few weeks difference, yet the question remains “is the Delta variant going to see a whole lot of releases pushed back–again?”.

“Venom : Let There Be Carnage” sees Tom Hardy return to the big screen as the lethal protector Venom, one of MARVEL’s greatest and most complex characters. Directed by Andy Serkis, the film also stars Michelle Williams, Naomie Harris and Woody Harrelson, in the role of the villain Cletus Kasady/Carnage. 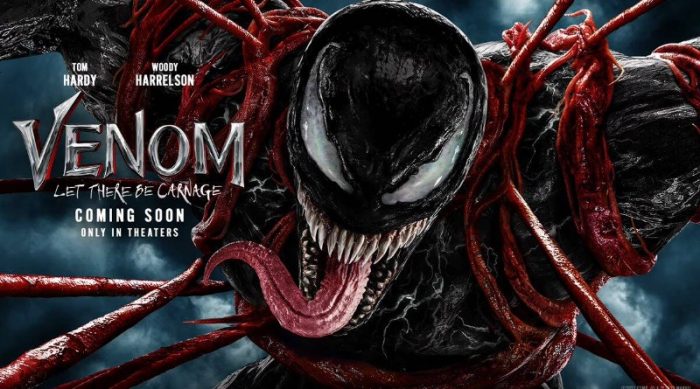 We’ve good intel that aren’t budging on “No Time to Die”, the latest, long-awaited jaunt of Jimmy B, and are planning to stick to the current release date (Australia September 30, U.S October 8) rain, hail, or spike. The consensus there seems to be that audiences have waited long enough for the film.

Seems to be the same with “Candyman” (Aug 26), “Shang-Chi” (Sep 2), and “Halloween Kills” (October 14) – with the studios pushing forward, currently screening the films to critics and conducting media junkets, as if they’re definitely releasing this time.

As 2020 showed us though, the pandemic can quickly take such a turn that studios have no choice but to hold onto their tentpoles a little longer.