A film that’s been in development since the mid ’90s might finally be coming to fruition.

There’s been a lot of chatter over the years that Morgan Creek have been keen on resurrecting some of their most profitable franchises –  “Ace Ventura” and “Major League” are two others they’re looking at doing something with – and one of them would seem to have taken sequel shape.

“Young Guns” and “Young Guns II” scribe John Fusco let slip, via tweet, over the weekend that he and Emilio Estevez – back as Billy the Kid, no doubt – are collaborating on a third “Young Guns” movie.

Emilio Estevez and I are excited to be collaborating on this continuation of the Billy the Kid saga – and you’re going to love where it goes @LouDPhillips @RealKiefer @ChristianSlater @EW @headgeek666 @vincentdonofrio @prattprattpratt @regulator pic.twitter.com/IOrTmULDOf

Based on who is mentioned in the tweet, original “Young Guns” and “Young Guns II” co-stars Christian Slater, Lou Diamond Phillips and Kiefer Sutherland would be returning, in some capacity (despite the fact a couple of them died in the last flick), while Chris Pratt and Vincent D’Onofrio – two of the stars of the “Magnificent Seven” remake – might be attached too.

A couple of those folks have either retweeted or liked the post, essentially confirming their involvement, but still nobody’s much talking about where the project is at, who is officially starring in it, and how – if characters like Chavez are returning – the dead will return.

Assumingly Fusco is writing the project – maybe with Estevez? – and while a director isn’t mentioned, it’s entirely possible that Estevez will be behind the camera for it, since he’s become quite a prolific filmmaker since last playing William H.Bonney.

Interestingly, musician Warren G is tagged in the tweet – -is it possible he’s doing the soundtrack for the new film, filling the shoes of Jon Bon Jovi who composed the tunes for “Young Guns II”?

Estevez has seemingly always maintained an interest in Billy the Kid, appearing at Hico’s Billy the Kid Museum as recently as 2019.

In 2011, we actually sat down for a chat with Estevez, and spoke a little about the “Young Guns” franchise.

The actor noted he was a bigger fan of the sequel because of it’s look :

Dean Semler shot both of them. And I prefer the cinematography in part II. I prefer the look of Part II in that we shot it 235. And Young Guns was 185 and I just can’t imagine even contemplating shooting a western and not shooting 235, right?

There is many a slip twixt the cup and the lip — William H. Bonney. #YoungGuns pic.twitter.com/GMsaOMHgxA

Me and Emilio on the Mexico border in 1989, discussing a scene during the filming of #YoungGuns 2. At the end of the shoot, he gave me his 1881 Colt Lightning. Guess I will need to give it back to him. No surrender for #BillytheKid pic.twitter.com/bQJatcEsVT 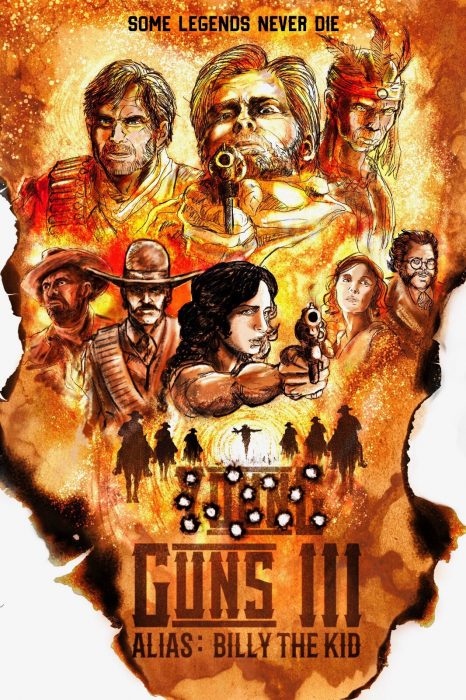