Hot off its Canadian premiere at this year’s virtual Fantasia Film Festival, writer/director Noah Hutton generously took the time to speak with Kyle about his fascinating new sci-fi film Lapsis and much more. Lapsis and many other great films are now available for on-demand streaming thanks to the folks behind Fantasia 2020!

I felt the movie had a pretty bleak view of the gig economy and how it can be used to manipulate the working class. Was there a particular headline that popped up one day that drove you into inspiration? Or was it something that was building up over time as a general concept?

Noah: Yeah, I think it wasn’t necessarily one headline about the gig economy that got me. I will say, it is read as a satire of the gig economy, but for me, much of labour at large in general has become part of – not exactly the gig economy – but part of the issues afflicting the gig economy, I think applies to other sectors of labour now too. So I think there has been a kind of gamification of labour en masse across sectors. Not just independent contractors who are doing gig-style work, but many companies are shedding full time employment for independent contractors, for contract-style work relationships. And these are for huge corporations. You wouldn’t call those those jobs gig economy jobs, but any big telecommunications firm or health sector for a company that’s now using contract work, for example.

I think anything that’s basically shed the protections of full time labour, prevented people from unionising and destabilised that kind of relationship between the labour base and atomized their workers – I think that can all be lumped into this critique that this film is looking at. Which is: as technology soars ahead, we need to remember that we need to use it to protect people, not to break them apart and take advantage of them.

Noah: Yeah, I guess speculative fiction works for me. I like that. We always use the term ‘parallel present’. I kind of like the reverberation of that, because what I don’t like is future. Because it was never meant to be that; it was never meant to be, “this is the future”. I think it’s purposefully meant to feel a little retro to work against that. And that’s how analogies work for me. This is an analogous world. You can take whatever critique you want to make of our current world, and I think you can see it reverberating in that sort of mirror that’s being held up.

I found the film to be frequently very funny, without losing its tension or sense of mystery. It doesn’t fall into being a farce. Was it difficult to strike that balance when you set out to write and direct the film?

Noah: As a first time filmmaker, I think tone is one of the hardest things. You haven’t seen your work go out and go through the whole cycle yet. And although I’ve done shorter films it’s easier, in a way, to decide what your tone is going to be for a short, and go after that. But for a feature where you are trying to to navigate a few different tones and you’re trying to touch on genre a little bit, it is difficult. And that was a challenge.

We kept working on that through stages, like scoring the film and editing the film. The music certainly gives you cues about, “this is potentially more ominous”, or “there’s a mystery here”. And those are things where you let the footage tell you that this could be mysterious; this could be ominous even if it wasn’t there in the text to begin with. So that definitely kind of unfurled as we went through the process.

I think a big part of of managing that tone was your lead, Dean (Imperial). I really enjoyed him – he really carried the film. His performance was so charismatic. But I had a look, and he doesn’t really seem to have done all that much acting before Lapsis. What drew you to him when casting the film?

Noah: Yeah, he hasn’t been in any films before, really (laughs). He’s part of this theatre scene in New York City that’s around this place called Naked Angels. He’s more of a writer – or at least has been more of a writer – than he has been an actor. And so I’d seen him in readings at Naked Angels. And I just had a feeling…he became the muse for me with this film. I honestly wrote the film for him, and it was completely irrational to do that. You know, you’re told that every step of the way when you’re trying to raise money for a film that you needs to put names under it – you need to get the biggest name you can get. So we were unable to get the money together for a while for this film.

And people were saying, you know, “who is this guy Dean? Why are you betting on this guy?”. I honestly couldn’t think of making the film without him, because I wrote the part for him because I had seen him and it’s just – your imagination takes play. So it did make it more difficult to get the movie made on one level, but without Dean the movie wouldn’t have been made at all. And I agree, I think he just does a fantastic job.

I understand you used real, practical robotics for the machines that compete with the human cablers in the film. How did you arrive at the decision to go practical over CG, and did that offer any particular unique challenges that you might not have faced otherwise? Or did it end up working to your advantage?

Noah: I think it worked to our advantage, because it really made these things feel like they’d been in the forest for a while, you know? It made these robots feel like they were a little janky and that they were dirty and and had been weathered a little bit, and very much of the landscape; and that was something I wanted for sure. The difficulty, well, you can imagine the difficulty. But you then have to make sure that they work when you need them to work.

And beyond them just working, rainy weather was the biggest threat on this. We could have gotten so off track with this project if it had even rained one or two more days while we were shooting. Luckily, we didn’t get rained out a single full day. We had half-days that were interrupted, where we were able to scramble and re-figure something out, but the robots would not be able to operate during the rainfall. And luckily, we got everything we needed from them without the weather interrupting us.

But it was very fortuitous, because CG effects would have been costly to achieve what we wanted to do. I don’t think it would have looked good on the scale of budget that we had for whatever we could have paid for. And so we’re left with it, you know; trying to figure out what we can do. And what we did do was, we found a lab at the University of Pennsylvania. It builds these things and then built them for Boston Dynamics – there’s many, many viral videos of the Boston Dynamics robots. I had seen those videos – many many people have – and those are often like dogs and humanoid looking robots. But I was drawn to these older ones from the 90s that kind of looked like insects; cockroaches or something

And so those were closer to like what we’re seeing in some cities now with these delivery cars, these automated delivery cars that deliver food. I haven’t seen those in New York, or anywhere I’ve been, but I’ve seen videos of them. And so I feel like this ended up being a great solution for us. They were able to send students out with this robot, they could control it on set and that was at no cost to us because they made it an academic project. That was such a huge, lucky thing to come across, because we wouldn’t ever have been able to build robots and do it all ourselves. It’s very fortuitous to find a lab that was willing to make it part of their summer for their students.

Yeah, I think would’ve been to the film’s benefit even if you had a huge budget and a much bigger scope. I’m a sucker for practical effects anyway, so it was a good decision!

You transitioned to Lapsis from documentary filmmaking. Do you feel that this is a shift into a new phase of your career, or is this more of an experiment and you’re just looking to do whatever strikes inspiration next?

Noah: Yeah, I always wanted to go this way – to try to write and direct a feature film – and it’s been a dream to be able to do that. So, the order of operations of having started in documentary and now having done this – it’s just sort of the way it happened. But I don’t really feel like I had a change of heart. My kind of like, mentor – and I was able to work with him a bit before he passed away – was Jonathan Demme. He executive produced my first two documentary features. His career is really a model for me, to have someone who just went with what he was interested in. He has such a range of work, from concert documentaries to Silence of the Lambs; it’s a breathtaking range that he had. You couldn’t really peg him as being in one genre, or documentaries, or narrative films.

I think (Werner) Herzog is also someone who has gone where his interests have resided. I think those are the icons for me, looking at film. It’s just a way to stay interested, to stay engaged with the world.

So what’s next for you? I know that – considering the state of things in the world right now – it’s probably a little hard to have a solid idea of exactly what is next for you. But are there any other sort of social or environmental or political issues that have been inspiring you in the way that you experienced with your documentaries and Lapsis?

Noah: I have a documentary coming out soon that I’ve been working on in parallel to finishing up Lapsis. It’s a 10 year film about simulating the human brain, a neuroscience film documentary. I’ve been going once a year to this project in Switzerland called the Blue Brain Project that announced in 2009 – now 10 years ago, so long ago – that they were going to build a simulation of an entire human brain in 10 years on IBM supercomputers. It caused a huge sensation in the field, very controversial. The project has had many ups and downs, but I’ve been basically tracking it for that whole time. And I’ve now put together a feature length documentary, and we’re just figuring out now what to do with it. It’s pretty much done. So we’re going to try to figure out where to submit it or get it released. So that’s coming up for me. I’ll be shepherding that out. But after that, I’ve started to write another narrative film. It’s very early stages, but it takes place at an advertising agency and it deals with aliens. (laughs) That’s all I’ll say! 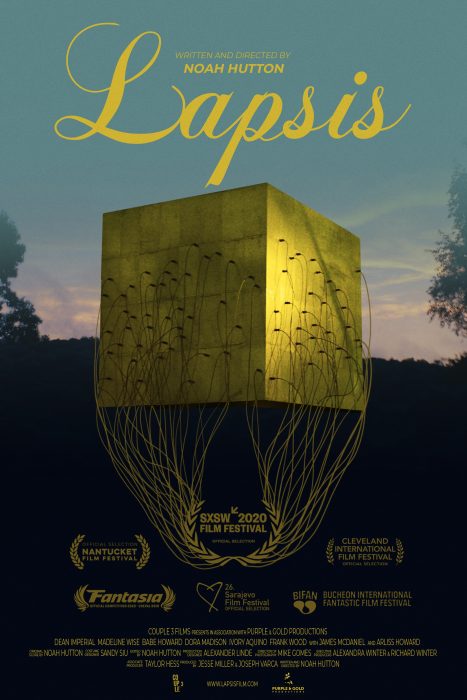