Heading into this year’s Fantasia Festival, Ben Hozie’s PVT CHAT was high on our list of most-anticipated screenings. Its razor-sharp and darkly comedic exploration of intimacy, internet culture and obsession in the modern age makes it an entertaining and incredibly timely watch, lead by Peter Vack and Julia Fox.

Ben Hozie graciously took the time to speak with Kyle Milner about the film following its Fantasia premiere.

[Note: this interview does briefly reference the film’s ending, so beware if you haven’t yet watched it!]

KM: The protagonist of PVT CHAT, Jack, is a rather unpleasant person. At the same time, he has a charisma and charm that keeps him from being entirely unlikable. How did you decide where to draw the line with his character?

BH: That’s a good question. When I first started writing the film, he was going to be far more unsympathetic. It was going to be more in the style of Pickpocket or Taxi Driver, something where you’re forced to live in someone’s head. But I realised that that job has been done before, and that’s not exactly what I wanted to do with the film.

When we were making the film, we started improvising a lot with the character. It was my aim with Jack that people would see themselves in him. For the sake of the drama, he has to do repellent things: breaking into her house, being addicted to gambling, etc. But I also didn’t want him to be a total creep. It was important for me that it’s clear Jack has a nihilistic worldview, but he does genuinely love people too. 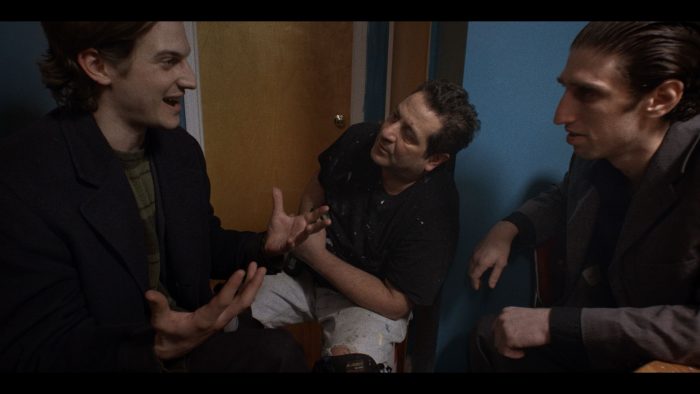 There was something about that that felt really true to me. In almost all the scenes, he’s actually really kind of everybody. It’s almost like he’s unaware of the unsavoury things he’s doing. I wanted to show that some of the things he does, which are morally questionable (and certainly, breaking into someone’s house is), are online behaviour. For example, stalking somebody’s Facebook profile. For him, doing that in real life is no different. He doesn’t understand the boundary.

A lot of that comes from Peter Vack. He’s just such a jolly guy. I wanted to bring that aspect to the character. I didn’t want to make a nihilistic movie; it would have been very easy to make this kind of story really dark and just show what a gross guy he is. But I realised that wouldn’t be revealing of anything, really.

KM: I was pleasantly surprised that Scarlet, Julia Fox’s character, ends up having a significant arc of her own. She’s not just the distant subject of Jack’s obsession. Was that always the plan?

BH: It was always one of the first hooks of the movie that you’d be forced to be stuck into this guy’s head, or at least really living in his world. You’re so thrust into it that you almost don’t realise that you’re seeing the world through his point of view – and then the rug is pulled out from under you. We flip to her point of view, and you realise there’s a lot more going on here.

It became so important to me to think of them as two protagonists in that way. There could have been a version of the movie where you start with her instead, and that could have been just as interesting too. 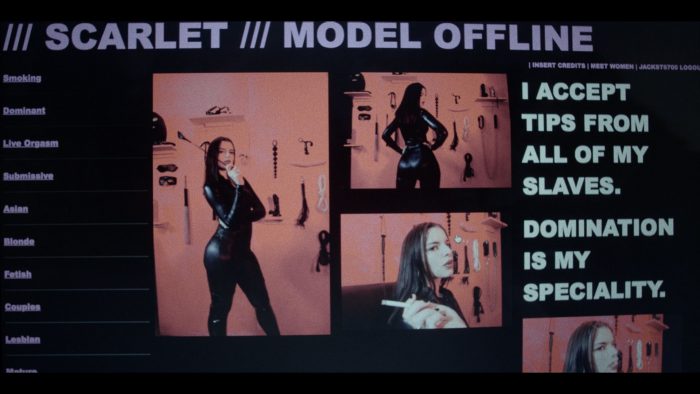 KM: A lot of the camerawork is very gonzo; a lot of handheld shots and intimate blocking. That works well for taking us uncomfortably close to a character like Jack. What informed your decision to go with that style of shooting?

BH: I was thinking a lot about how you could make a story about online chat cinematic. I didn’t want to do a screen-capture kind of movie where you’re just watching Skype chats on a computer screen, you know what I mean? The camera had to be tactile; a living, breathing presence. I didn’t want it on a tripod, it had to be moving around.

I was thinking about directors like Wong Kar-wai or Terence Malick, and how they use really wide-angle lenses to make you feel that depth of field. You feel like you’re literally in the place on-screen – it has a 3D pop-up picture book feeling, even when viewed on a flat screen.

I did all the operating myself too, which I prefer. It just gives it a super personal feeling where I can improvise with the actors, and glide around them. And because it’s such a wide-angle lens, I’m right up in their faces. Maybe it wasn’t comfortable in the beginning, but they all eventually got used to it.

KM: Taking a look at some of the reactions to the film following the festival, the ending seems to have been somewhat divisive. Was that particular ending locked in from an early point in the writing process?

BH: Yeah, from the very first draft it was there. I think there’s something about when you’re creating a film, you don’t really know where things are heading unless you know how it’s going to end. You kind of work backwards.

But that felt a little besides the point – the point is not that they’re touching, it’s that in their minds, they’re now close again. It would’ve ruined the metaphor at the end of the movie, so I immediately went back on that. It was literally the only rewrite I had.

KM: A very specific and personal question on my behalf: how did (Red Scare podcast hosts) Anna Khachiyan and Dasha Nekrasova become involved?

BH: Well, we actually shot the film before Red Scare, or at least before we knew about it. I think they started about a month after PVT CHAT. But I’d seen Dasha in Wobble Palace, and I thought she was great in it. Initially, she was going to have a bigger role in PVT CHAT, but I ended up cutting it down to a little cameo just because that’s what worked best for the story.

As for Anna, she’s a friend of our producer Oliver David. I guess they had been involved in the Lower East Side art scene, so we got her to make a cameo. Once the movie released, a lot of people and magazines were reaching out, saying “tell us more about the Red Scare girls!”. It actually happened totally by chance, but I do like their show too. The world’s not all that big!

KM: What exactly do you have in the pipeline at the moment?

BH: I’m not sure if you know this, but my main gig is actually playing in a rock band called Bodega. We’re cutting a record in about two weeks. So that’s my main project right now. I do also have a script that I’m going to try to shoot after quarantine, depending on how it all goes.