The latest film from British writer/director Corinna Faith cleverly fuses the real-life setting of the blackouts of 1970s Britain (due to miner’s strikes at the time) into a chilling tale of institutional abuse and its echoes. The Power, starring Reign’s Rose Williams, follows a young trainee nurse who discovers horrors beyond imagining in her first assignment at a local hospital.

London, 1974. In THE POWER, as Britain prepares for electrical blackouts to sweep across the country, trainee nurse Val arrives for her first day at the crumbling East London Royal Infirmary. With most of the patients and staff evacuated to another hospital, Val must work the night shift in the empty building. Within these walls lies a deadly secret, forcing Val to face her own traumatic past in order to confront the malevolent power that’s intent on destroying everything around her.

We had the pleasure of speaking to Faith about the historical context behind the narrative of The Power, her choice to cast Rose Williams in the emotionally demanding lead role and some behind-the-scenes production secrets!

I’d love to talk about the historical backdrop of the film; the 1974 blackouts across Britain. It’s such a uniquely good setting for a horror film, so I’m curious where your interest in that period began.

Corinna: It was the gelling of two things. It was the fact that there were, unfortunately, a lot of horrible institutional abuse stories breaking at the time that I was looking for territory to write a ghost story. They were mostly emerging from that time-frame; in particular, the Jimmy Saville scandal. I’m not sure if you’re familiar with him, the British presenter.

Corinna: Yeah, he was iconic in the 1970s. So I was thinking about that era, and then I came across an image of a secretary working in the dark with an oil lamp, which looked like the 70s – but the oil lamp made it look like a Victorian, Gothic image. I just loved the combination of those two things. I love classic supernatural storytelling from that period. So it was a collision of all those that drew me to that era, and I learned more about the blackout, which I was aware of but didn’t really know that much about.

I’d never know that this was a thing until I discovered The Power. It doesn’t help that I’m in New Zealand, so quite far away – but I imagine I’m not alone in only recently discovering it. It’s an interesting time on multiple levels, from the economic issues that led to the blackout; and of course you have all these institutional horrors of different industries that culminates in Val’s story.

Corinna: Yeah, absolutely. I was only two when it was happening, but from talking to some people who are old enough to have really experienced it, it was quite a frightening time. It was very strange and disorienting to have the power taken away like that. So I think it’s a rich time to write about.

I understand that Blythe House in London was used as a shooting location. I’ve done a little bit of reading about it, and I’m curious to know the extent to which it was used for shooting since it seems like it’s mostly used as a museum.

Corinna: The rest was shot in an ex-psychiatric hospital called Goodmayes, which had been decommissioned. But it’s actually a single-storey building, the whole thing. It’s a large building, all on one level. So we had to create the sense of different floors, and Blythe House has a staircase – so it was combined, just for one day.

You did a very good job of that, because there’s a lot of camera direction that gives a 360 degree sense of space. It helps a lot with atmosphere, and you did well to create the illusion.

Corinna: That’s good! That was a bit of a challenge, especially when somebody has to go out the window. 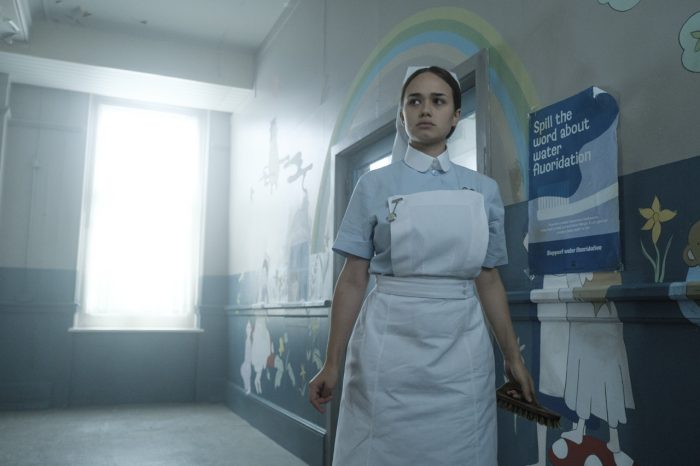 A real standout of the film is Rose Williams as the lead character Val. I was quite taken aback by how well she was able to depict her journey from such a shy, idealistic nurse through this internal and external ideal that changes her a lot. She does such a remarkable job of flipping that switch. What about her as an actor stood out to you when casting?

Corinna: She’s an incredibly empathetic person. I think when I saw a tiny clip from a filmed read, which really excited me about her straight away, I thought that she is somebody that you can access as a viewer. You empathise with her very strongly, and you can access what she’s feeling really easily. She’s incredibly relatable. She can really tap into vulnerable places quite fearlessly, and allow you to see them. That was a huge gift, because the story is such a tight time-frame. She’s got to tell so much about that character in such a small amount of time, and with very little setup or backstory. She’s got an incredible range, obviously, but she’s very instinctive. I just think she’s great. It comes down to her being willing to go to those places and show them.

In a role like that, you’re kind of carrying the emotional weight of the entire film, in a way. She’s certainly capable of it.

Corinna: She’s very bold, and she was very brave about the whole process. She really wanted to do something really different and show a completely different side of her abilities.

To go back briefly to the historical setting of the film, I’ve been thinking about how period horror is quite a popular subgenre these days. But it often delves much further back, into the 19th century and such. It’s quite refreshing to explore something a little more contemporary, but still detached from the modern day. Is that something that particularly leapt out to you as a writer?

Corinna: I don’t know about that, but I did feel it was very helpful that we were telling a story that’s still very resonant now at a time which is still in touching distance of now. So you can start to build the pieces from that cultural moment and the way people were able to behave then, and follow the lines quite directly. I mean, you can do that in other cultural, historical settings as well. But I found that very interesting, going back – not that far, really – and look at TV and the press and the way people were represented and the things they were allowed to say and it’s really shocking. But it’s really not that long ago, so I think there’s something very fascinating about that.

THE POWER will be available on VOD, Digital HD and DVD on September 21, 2021.