We’ll see Michael Keaton back behind the cowl next year in Warner Bros’ “The Flash”– and the internet is a McFlurry of joy that the actor, considered the best of the Batmen, has agreed to return to a role he quit in the early ’90s.

Considering his popularity in the part,  it’s amazing to think that the now 69-year-old actor only played Batman twice. Had the studio listened to his concerns back in 1995,  we might’ve been blessed with much more than the pair of Keaton-led Batman films.

In an alternate universe, Tim Burton stayed on as director of “Batman Forever” (1995)- completing his Bat-trifecta, after “Batman” (1989) and “Batman Returns” (1992) – and with him, Michael Keaton, back as the Caped Crusader.

When Burton parted ways with the production, so did Keaton – but during their brief attachment to the film, some wondrous ideas were cooked up!

Here’s what went down :

Burton and Keaton were yakking about a third “Batman” shortly after the release of the successful but not-too-kiddie-pleasing “Returns”.

The film – then known as “Batman Continues” – would bring back characters from Burton’s first two films with the main rogue being the regularly-questioning Riddler.

Keaton, excited that Burton was shaping a film with a similarly dark tone to “Batman Returns”, was gung-ho about reprising the role (Funnily enough, the tone is what led WB and Burton to part ways, with the studio keen on a much lighter adventure than it’s predecessor.)

Keaton loved Burton’s idea near as much as the cast, especially the female lead. He was looking forward to working with Rene Russo on the film – she had been cast as Dr. Chase Meridian (the role Nicole Kidman ended up playing) but dropped when Burton left – having worked with her on early ’90s cop piece “One Good Cop”. 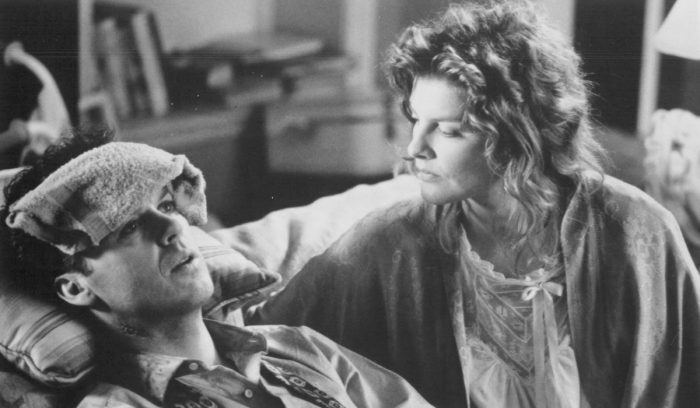 Burton was also flirting with some fun names for the role of The Riddler, which had Keaton excited – particularly that of musician Mickey Dolenz and Robin Williams, who had been in the running to play The Joker in the original.  Billy Dee Williams, who played Harvey Dent in Burton’s original, would also reprise that role, Marlon Wayans was in talks to play Robin, and Brad Dourif (of “Child’s Play”) had been discussed as a possible Scarecrow.  There was also talk of Michelle Pfeiffer’s Catwoman making a return appearance – if only to set-up a spin-off that was in the works.

I’m guessing one of the villains would’ve taken center stage, and the others would’ve just popped in or out (maybe not even in their villain guise but as their alter egos), so things didn’t get as as squishy and messy as the film we ended up getting.

Warner Bros were already unsure about Burton coming back though – after all,  his “Batman Returns” failed to sell McHappy Meals (true!),  and the studio considered that a vital part of any superhero blockbuster at the time.

Convinced his “Batman Continues” wouldn’t be suitable or appealing to younger viewers, Warner Bros dropped Burton from the production and started from scratch. (When it was cancelled, so was a “Catwoman” spin-off starring Michelle Pfeiffer, with Warner Bros determined to reboot the Batman universe with a lighter, campier tone– one that would ultimately appeal to McDonald’s marketing committee more.)

Warner Bros loved Keaton though, and expected he would join new director Joel Schumacher on the project. Once Keaton got wind of the campy tone, and glanced the script, he made a call to quit.

“It sucked,” Keaton said of the “Batman Forever” screenplay in 2017. “The script never was great. I didn’t understand why [Schumacher] wanted to do what he wanted to do … I knew it was in trouble when he said, ‘Why does everything have to be so dark?’”

“I tried to be patient, but after a certain point, I was like, I can’t take this any more, this is going to be horrible”, the “Beetlejuice” actor told The Guardian. “But, look, there was some really horrible taste in the ’90s, and I probably contributed to that, unfortunately. It was a time of nouveau riche excess – everyone was known for their jets and their stuff. And I thought, I’m in this job for the long run, I don’t want this. And the truth is, I’m not boasting, but I was correct.”

What I wouldn’t give to read that original script..