Though first mooted a few years after the release of the first sequel, 1990’s “Three Men and a Little Lady”, a proposed third film in the “Three Men and a Baby” ‘franchise’ really only took shape in 2010 when Disney tapped Gomez Creasey, Dara Resnik, and Coline Serreau to write the film.

The plan was for Tom Selleck, Steve Guttenberg and Ted Danson to reprise their roles from the hit 1987 and 1990 comedy hits – this time ushering their ‘daughter’ down the aisle.

“It is true that Disney checked my availability”, Selleck said on the promo trails for his film “Killers” in 2010. “And I know they checked Ted’s and Steve’s, and then had a script written, I think tentatively called ‘Three Men and a Bride,’ which kind of says it all.”

Though his comments suggest he’d likely pass if the storyline didn’t grab him as much as the one in the original Leonard Nimoy-directed film, Selleck seemed quite keen to reteam with his co-stars for another go-round.

“I hope it’s a good script, and if it is a good script I hope they do it, because it would be really fun to get back with Ted and Steve. The strongest of the two movies I think is the first one. It had more heart, and that’s what I hope this third one would have if we do it.”

“The script is pretty much written and we are really keen to get that made”, Guttenberg, who has also been attached to a new “Police Academy” sequel for many years, told the press at the time. “We’re very hopeful.”

Then, all went quiet on the film – either Disney got cold feet or someone on the credit block nixed the idea because the project stalled.

Selleck, appearing on The Talk, said “It seemed to be real, and then it disappeared.”

We caught up with Dara Resnik (co-creator of TV’s wonderful “Home Before Dark”), who co-wrote the script for the proposed third film, who filled us in on the ups and downs of trying to get the original Peter, Michael and Jack back together with Mary.

Thanks so much for talking to us. As a huge fan of the first two films, we’ve been tracking the development of the third film for a long time – and I’ve gotta tell you, was a little bummed to hear they’re abandoning plans for a third film and instead will simply remake the original.

I was also incredibly bummed. Given the iconic careers Ted Danson, Steve Guttenberg, and Tom Selleck have gone on to have, I was really hopeful we could see that team reunited.

Such a shame. How close did it get to happening? Was the cast onboard?

My recollection was that some quiet, off-the-record conversations were had with agents, just to gauge interest, and all of them were game for a reunion. I believe Steve talked about it in the press a few times, in fact.

So, Peter, Michael and Jack would’ve returned for the film- anyone else from the originals?

No, it was just those three — Nancy Travis’ character would have died off-screen before the movie in our draft. This gave us a chance to have Tom Selleck’s character go through a very emotional time just as his daughter was getting married herself.

Oh! Did the script serve more as a direct sequel to the original film, or were there references to ‘Three Men and a Little Lady” in there too?

Oh, we had all kinds of references in there from both movies. For example, “what a crock” came back from the second movie. I joked to Oren Aviv, who was the President of Disney Studios at the time, that I felt like I was born to write “Three Men and a Bride.” I was a GIANT fan of the movies growing up. In fact, this shelter-in-place order has given me a chance to show the movies to my own daughter. It’s been fun to watch her enjoy them for the first time.

The first movie probably influenced my current show, “Home Before Dark,” in that it was a family movie with this dark subplot about drugs. Our show also has some dark subplots and movies like that proved it was possible to balance both.

I can definitely see that! Can you hint as to the plot?

Mary was getting married and her dads were all having a lot of feelings about it. 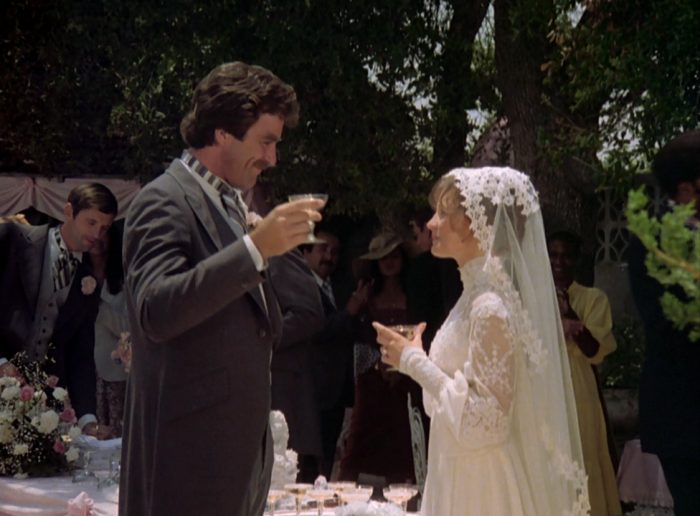 Was this one of the first big studio sequels you’d written? When you heard the film wasn’t going ahead, what did you turn your attention to?

We had written a tiny straight-to-DVD movie called “Legally Blondes” that was a spin-off of the Reese Witherspoon movies. I think it probably helped us land this one. We went on to write an adaptation of “Father Knows Best” and several other features before turning our attention back to TV.

And some dynamite TV Resnik has – check out “Home After Dark”.

Hopefully Disney will hear the sniffles of “3 Men” fans around the world and get “Bride” back up! (after all, didn’t we already get a sub-pair “3 Men and a Baby” remake!?).

If YOU have an idea for THE SHELVED (exciting films that didn’t come to fruition), please let us know!

if YOU were involved an exciting project that was SHELVED, please let us know!