AUTHOR’S NOTE: I interviewed the lovely Dawn Wells shortly before she passed away. The below article is presented as is.
**
Talking to a literal ICON like Dawn Wells was intimidating. As Mary Ann Summers in “Gilligan’s Island,” Wells was a woman that every Gen Xer female like myself had grown up with and had emulated, the role model that every girl wanted as her best friend. And she proved to be all that and much more in this interview.
After “Gilligan’s Island” (where Mary Ann was modeled after Dorothy in “The Wizard of Oz”), Wells went on to make her mark on stage as well as on TV (“Maverick,” “Sunset Strip,” “Bonanza,” “Hawaiian Eye”) while keeping her humor and down-to-earth quality. Here, Wells talks about her most famous role, her upcoming TV series and how one of her goals is to ride an elephant.

Moviehole: How did you get interested in acting?
Dawn Wells: I went to Stephens College where I majored in drama, and I just loved it; I took a few classes and went to work right away as an ingenue. It was a two-year school where I did all the leads, I went to school in Washington and I grew while I was doing it. I had an opportunity to fulfill a dream.

Moviehole: What do your fans say to you when they see you in the street? Do you have stories of how you’ve inspired them?
DW: They adore me because I was part of their youth, I was not a threat to them. To boys, I was their first love, their best friend, the ideal girl, not racy but a gentle nice friend. It was what the men in my life were looking for in their first love; they respected her, and respect has all gone by the wayside now.

Mary Ann stood up for herself, defining who she was and sticking by it; she was your best girlfriend and all those things were important in that day and age. It’s really important what we are believing in. I was raised a Baptist, a girl scout, and apparently it was good for us. The show was very clean, very moralistic, fair, and all those things aren’t the same today. I think we broadcast that.

Moviehole: Now, you were not in the original pilot – how did you end up taking up the role? And what acting method do you like the best?
DW: They got marooned in the pilot, it wasn’t specific. I think as actors, you find a method that works for you, there’s two or three, and I was pretty versatile and very much a type. I fell upon it and I really worked on it. You really have to make out what you were, really. Mary Ann could be your best friend, she wasn’t a hooker or a fly by night, she was pretty steady in that day and age and that’s what you needed. Mary Ann was a good solid character, I embraced her, and she was someone who was a specific type where young girls could believe in themselves. I was very lucky.

Moviehole: What has been the toughest challenge of your career?
DW: Breaking out of the character, trying to show something other than Mary Ann — but I don’t want to take the character away. You don’t know how many proposals I got because of Mary Ann, and there weren’t that many drugs then as now. They had me cover my navel, they had to shoot that again because we had to tape up my navel where it was showing when I walked. The shorts were really short, that was sort of risqué.

To young boys, Mary Ann was your crush, and I was very conscious of making them believe it; she wasn’t a flake or out doing drugs. She had standards, she was very loyal, smart, homespun, a hard worker. Mary Ann would never have sworn. There was a contrast with Ginger and that was deliberate, she was the free liver and Mary Ann was the goody two shoes.

Moviehole: I see you are very much involved with charity projects?
DW: I do a lot of that, I blend my name and face to that. I work with the Elephant Sanctuary in Nashville, it’s about saving elephants (10% of all sales on her eBay store goes to the Elephant Sanctuary). I want to ride an elephant someday. They are very gentle. I do fundraising and all of that, it’s public exposure for them.

Wells also loaned her gingham and shorts to the Hollywood Museum in Hollywood, California (http://thehollywoodmuseum.com) where she joked about “getting a chair and sitting next to the exhibit” to surprise fans when they walked by.

*Wells’ cable series “Dawn Wells: Reel Adventures” is now available on demand at Amazon Prime; the series is about Wells and world-renowned fly-fisher Kathy Ruddick traveling the world and exploring fly fishing in the countries they visit. The first episode aired on January 1. More details and links regarding “Dawn Wells: Reel Adventures” and other facts about Wells will continue to be posted at www.Facebook.com/TheRealMaryAnn.

**ADDENDUM: When Dawn and I talked about riding an elephant, I said I’d like to as well; she said, “Maybe we can ride elephants together!” I still plan to do that, and when I do, I will say “Here’s to Dawn!” To a lovely lady who I never got the chance to meet. 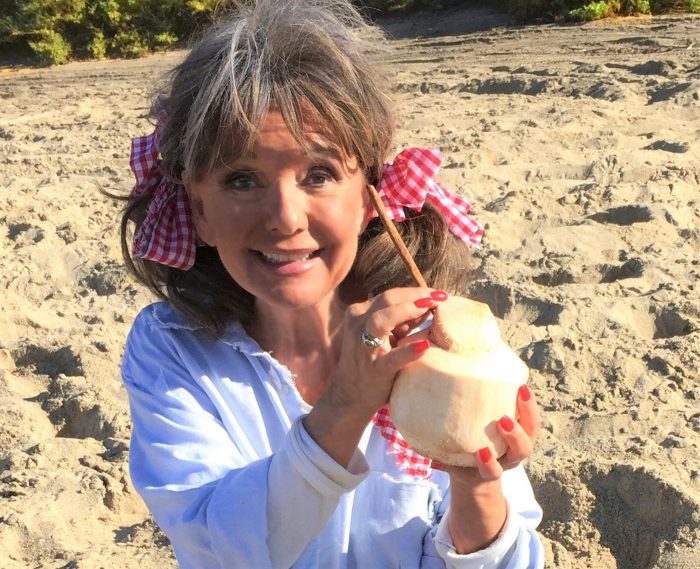