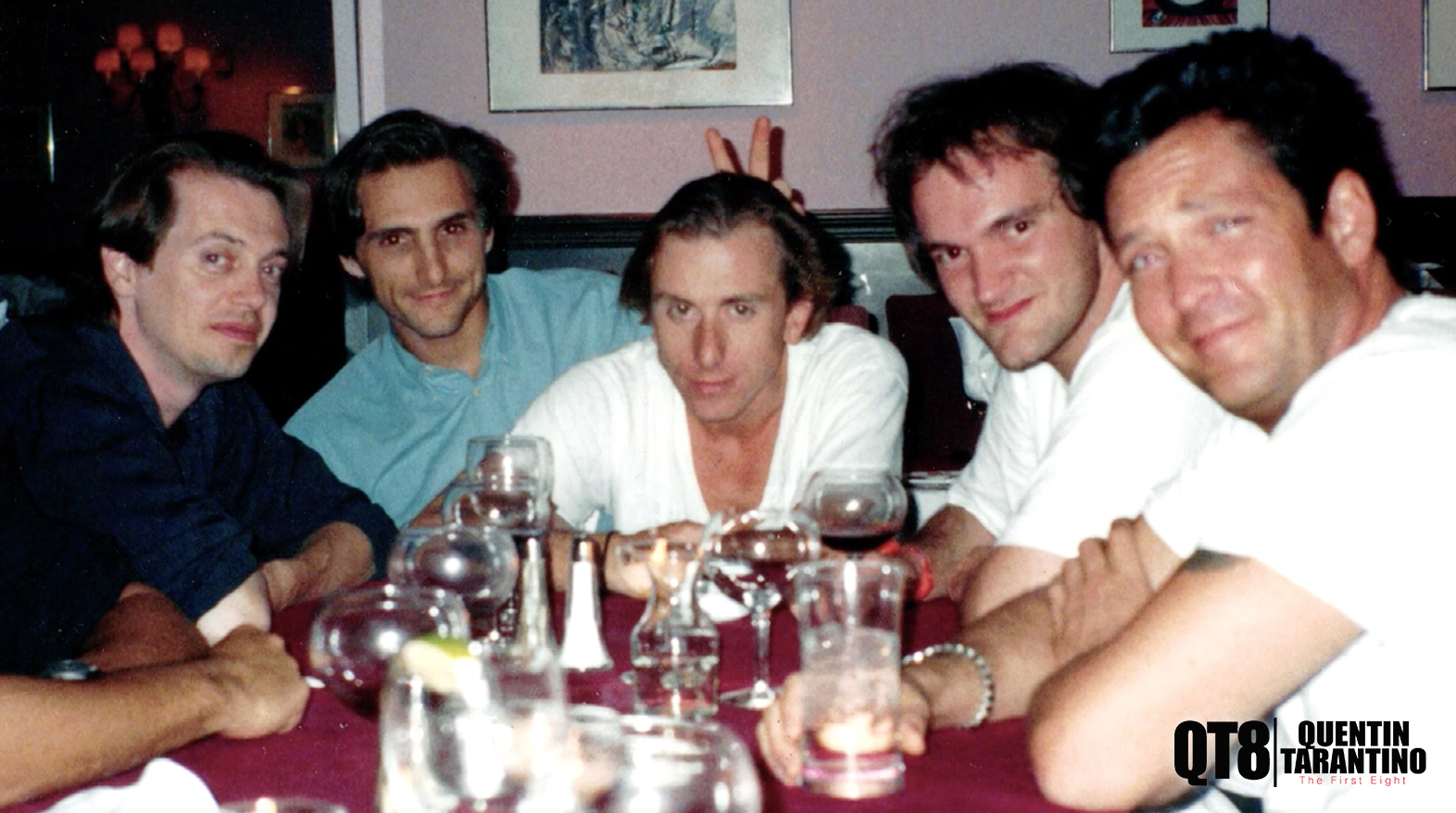 Quentin Tarantino is the most influential filmmaker of the past 30 years. His bloody, talky, nonlinear films pull together dozens of influences to form bracingly original cinematic events. In a Hollywood that worships at the altar of franchises and remakes, Tarantino’s films are the best kind of tentpoles – wholly unique cinematic visions from a filmmaker at the peak of his powers.

As Tarantino’s newest film ‘’Once Upon a Time in Hollywood’’ arrives to praise and controversy, filmmaker Tara Wood takes us on a journey through the first 8 wildly divergent films that Tarantino has helmed, narrated by the actors and collaborators who have worked with him.

From ‘’Reservoir Dogs’’ through ‘’The Hateful Eight’’, from the video store to the fall of Harvey Weinstein, ‘’QT8’’ digs deep into the story of the most important and controversial filmmaker of our time.

We caught up with Tara Wood to discuss the film, which is now available digitally.

What appealed to you about making a movie on Tarantino’s filmography – as opposed to say, De Palma, Friedkin, Landis or another filmmaker?
There are many wonderfully gifted filmmakers out there. Quentin became next in the series of documentaries because of his connection to Richard Linklater after completing 21 YEARS: RICHARD LINKLATER while I was living in Austin Texas and obviously my love of Quentin’s films and his brilliant characters, especially his layered female characters for a writer/director commonly noted to be male-centric. I heard a lot about him in Austin, saw him at events and the spoken word about him was that he was humble, “wears his heart on his sleeve”, loves and RESPECTS movies and their makers like no other.
Then why the constant media attacks, where’s the miss? What’s his deal with the N word, use of violence, “stealing” from other artists… who is this guy, Quentin Tarantino?

Was it hard to put together? Can you talk about some of the obstacles you faced?
It wasn’t hard per se… it was difficult coordinating scheduling because his people are so busy! But everyone was so eager and excited to speak about one of their favorite directors, it was awesome. It was really fun! Quentin insisted that he and I didn’t meet prior to me finishing the doc and it made the interviews really exciting because I was in the dark about him personally, about how he REALLY worked. It was thrilling!

The true difficulty didn’t start until I sold the film to The Weinstein Company then had to fight for the rights back of which had nothing to do with the making of the film or the creative process. The biggest obstacle being the Harvey Weinstein Scandal and how that affected the doc and how to include the effect on Quentin’s career looking back and forward.

There was a chance that QT8 would never been seen and after learning the things we did about Quentin, that basically one of the reasons that he is a genius filmmaker is because of his love of people and the constant exploration of the human condition in various historical times, this doc HAD to be seen. It took on a new vigour in the wake of the Harvey scandal with respect to women and our current society as a whole.

Who were the most enthusiastic, in terms of the actors involved? Remember who agreed to be in it first?
Robert Forster was our first interview, RIP. He was one of the kindest souls I’ve ever personally met and freely shared his love of Quentin as a filmmaker and as a man with the utmost earnest. He was one of the longest interviews, sharing deeply emotional stories, most of which didn’t make into the doc because of time restrictions but I hope one day all of those stories will be shared publicly.

Anyone’s story you were especially taken with?
Again, it was Robert Forster sharing a story about Quentin including Robert’s Father’s things on the set of JACKIE BROWN. This story is not in QT8 but here’s the excerpt from Robert’s interview:

“When Quentin and I started talking about me and the character and things, I exposed the fact that my dad, in fact he (Quentin) came over to my house. He wanted to see what my house was like and what I had, memorabilia, things that might work for the character Max Cherry. When he discovered that my father had been in circus, I showed him some of my father’s, his album of pictures from the circus …Max Cherry’s office has a little bit of the flavor of my father. My father, as I say, was a logger and then he was an elephant trainer, and then went on to other things, but he was fearless. Elephants are gigantic and they’re not always helpful and cooperative. You have to be able to handle them. He had a very soft touch, my father. Some of these guys were rough, tough, and if you ever read Water for Elephants, you know there are guys who mistreat, and that was the part of the theme with that little book, great book, which covered the era that my father was in the circus. He had a very, very light touch, my father. … and the idea is that this guy (Max Cherry) was a very solid citizen, a guy who was fearless. … I knew that those qualities of the old man, my father, were the kind of things that a Max Cherry would own inside of himself.
Quentin cut together some of the scenes that I was in, got them on to a video tape. Those days it was video tape. Overnighted it to Rochester, my dad and I watched them and he watched them over and over again for the last few days of his life. Quentin gave my dad one of the great gifts of his life. This is the kind of guy Tarantino is. Nobody asked him to do it, he knew enough to do it, and there you have what kind of a guy he is.” – Robert Forster

I imagine it was a hard job cutting the documentary down? Whose interview did you hate trimming down?
I hated trimming ALL of them down, there are hours of fascinating stories and anecdotes left on the “cutting room floor”. Sam Jackson goes deeper into the influence of Blaxploitation films and the importance thereof, should be its own documentary. Zoe Bell shares what it’s like to be a stuntwoman in a male dominated field and how it pertains to life and career and Quentin helping her become an actress. Christoph Waltz analysing the similarities of Quentin as a filmmaker and as a person and how that influences Quentin’s work. Scottie Spiegel shares tons of early Quentin stories, like living in the same first LA apartment as Travolta did. Stacey Sher details Quentin’s world, his first Sundance and cruising Europe post RESERVOIR DOGS Cannes screening. Richard Gladstein’s knowledge of Quentin’s entry into the business of film is enthralling. Amazing stuff, truly… I could go on and on.

Was the film shot before or during “Once Upon A Time in Hollywood”? Did you see it becoming the raging success it was?
Most of the doc was shot during the making of The Hateful Eight then put on hold literally the day Jodi Kantor and Megan Twohey’s New York Times article dropped on October 5, 2017. It took a year to win the rights back then we shot a few remaining interviews and finished the doc while Quentin was shooting OUATIH. Yes, of course I saw it being a raging success, it’s Quentin!

We’d be remiss not to ask you about Robert Forster. What are your memories of the treasured actor?
Robert brought everyone on our set a gift and handed it to each member personally after he completed his interview.

Did you have a favourite Forster performance outside of the Tarantino universe?
I have, since the doc, watched the Banyon series and love it.

Tarantino spoke, for years, about doing a ‘Vega Brothers’ movie – -why do you think that one never got off the ground?
Now, it’d have to be a prequal with pretty some badass VFX!
But really, Quentin’s got a lot of stories and characters in his head, I don’t know how he’ll get to them all! Maybe when he starts writing novels. I certainly hope so. We hear many interviewees talk about how reading a Quentin script is like reading a novel so I assume that reading a Quentin novel would be sensational.

Can you see him working with John Travolta again sometime though?
Quentin loves to revisit, maybe!