Director Benjamin Kasulke may call himself a “straight, boring white guy” but as the director of the film “Banana Split,” he’s got the teenage girl mindset completely down.

The contemporary film shows how social media has not only changed in different ways about how teenagers date, but also how their friendships (especially for females) have become even more important — not less so. Kasulke, a cinematographer for 15 years before directing his first feature film, was pretty concerned that the film would ring true and after seeing it, I can tell you it’s one of my favorite films of the year (and I’m hard to please as far as non-blockbuster films go). His friendship with Hannah Marks (who co-wrote and starred in the film) sparked the collaboration on this project.

Kasulke sat down with Moviehole to chat about millennials, working in Seattle and how an aspiring filmmaker doesn’t have to be based in Los Angeles or New York to make it anymore.

Moviehole: How did you get started in film with cinematography?
Benjamin Kasulke: I grew up in a remote part of northern New York state called Seranac lake; it’s really cold for six months and I had a VHS and just started plowing through movies. I learned how to figure out movies and I never knew there was a way to become a professional. In high school, I started touring colleges and walked into the film department at Ithaca College and thought, “you can go to school for this?” I did film school and worked as a negative cutter and as a film archivist and started shooting cinematography for films for friends. I did features at nights and weekends and did 15 years of that and then I got into directing. I was shooting film stock after coming out of school and I had a specific skill set, plus I had a day job during the recession so I didn’t charge high prices.

Moviehole: How was it jumping from cinematography to directing?
BK: I’d been working for so long at that point, I would shoot between 9 and 12 films a year, so that’s several directors to learn from. I would also do TV shows — you and your crew are a constant and every week there’s a new director, so really you are learning from a lot of different teachers and skillsets, you are learning from a big pool of talented people. There were some personal skillsets I’d wish I’d built up more, but I did know who did what, how to budget and I knew how to budget for “Banana Split.”

Moviehole: Why do you think there are not more films about real female friendships, especially with teens?
BK: I think probably teen movies are a big gamble financially, so you need something that feels safe. For many years, people didn’t think films with teenage friendships would work, so you see big comedy stuff. I get a lot of feedback from people that their friendships were like that; I get ladies saying that they were dating some shlubby guy and then became friends with other girls like that. It must be a generational thing. There’s a lot of millennials that it’s happened to, or it’s an offshoot of a social media thing where you have a huge social circle. You stay friends with someone you dated and then you see someone on their page.

Moviehole: What has been your biggest challenge with this film? Was it hard to work on a film about teens?
BK: For me, it’s a film about millennial young women, and the specific gender politics had to be handled well. I’m a half generation removed, I’m an almost 43 straight boring white guy and I didn’t want to step on any land mines making a film about young women and I wanted to make sure the actresses were taken care of. That was my biggest fear about being a child of the 90s.

That was a big battle, of artistry fear. I had movies or TV as a touchstone, as opposed to having this thing that allowed you access to everyone around you with social media. You are seeing a kid with a phone at meals, they are going through a total private and emotional life, it’s a different experience. I’ve been around a lot of millennials but it’s a much different scenario working through the emotional arcs and dramatics.

Moviehole: What is your advice to newbies?
BK: The biggest thing is that you don’t have to be in NYC or LA., so you don’t have to be in a place where you are miserable. I worked for many years in Seattle, so it’s possible. The second thing is a myth is that you have to wait for others to say start the race; it’s better if you start making things. You can borrow or buy a camera and wait to make things cheaply. You can do things in your hometown; you can just make your movie. There’s this idea that you have to work really hard and be a PA or read a script; you just need to make movies. What was nice about Seattle was that people wanted to make movies and I wasn’t paying high rent or working 85 hours a week to make it each year.

Moviehole: What are your future goals?
BK: I want to keep shooting, directing as much possible. I have a dream project biopic about Patrick Leigh Fermor and also Bruce Chatwin, those are pie in sky dreams — I also have some genre stuff I want to shoot, I want to do a western and work on thrilling suspense. I’d like to collaborate with Guy Madden.

Moviehole: Upcoming projects?
BK: I co-wrote and directed an episode called “Night Shift” on the HBO show called “Room 104.” I’m at the tail end of editing “Owl Moon,” a film about a band in the 70s in Laurel Canyon in L.A. It’s an interactive series on a platform called Echo, I’m aiming for the autumn. I also had a film I shot as a cinematographer called “Fully Realized Humans” at the Tribeca Film Festival.

“Banana Split” is now available On Digital and On Demand! 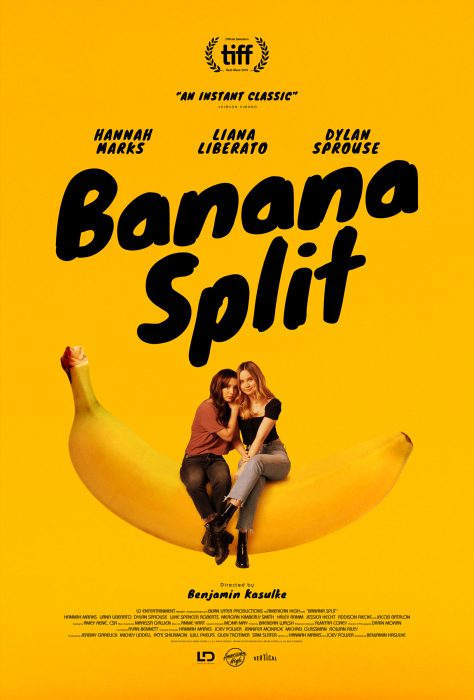