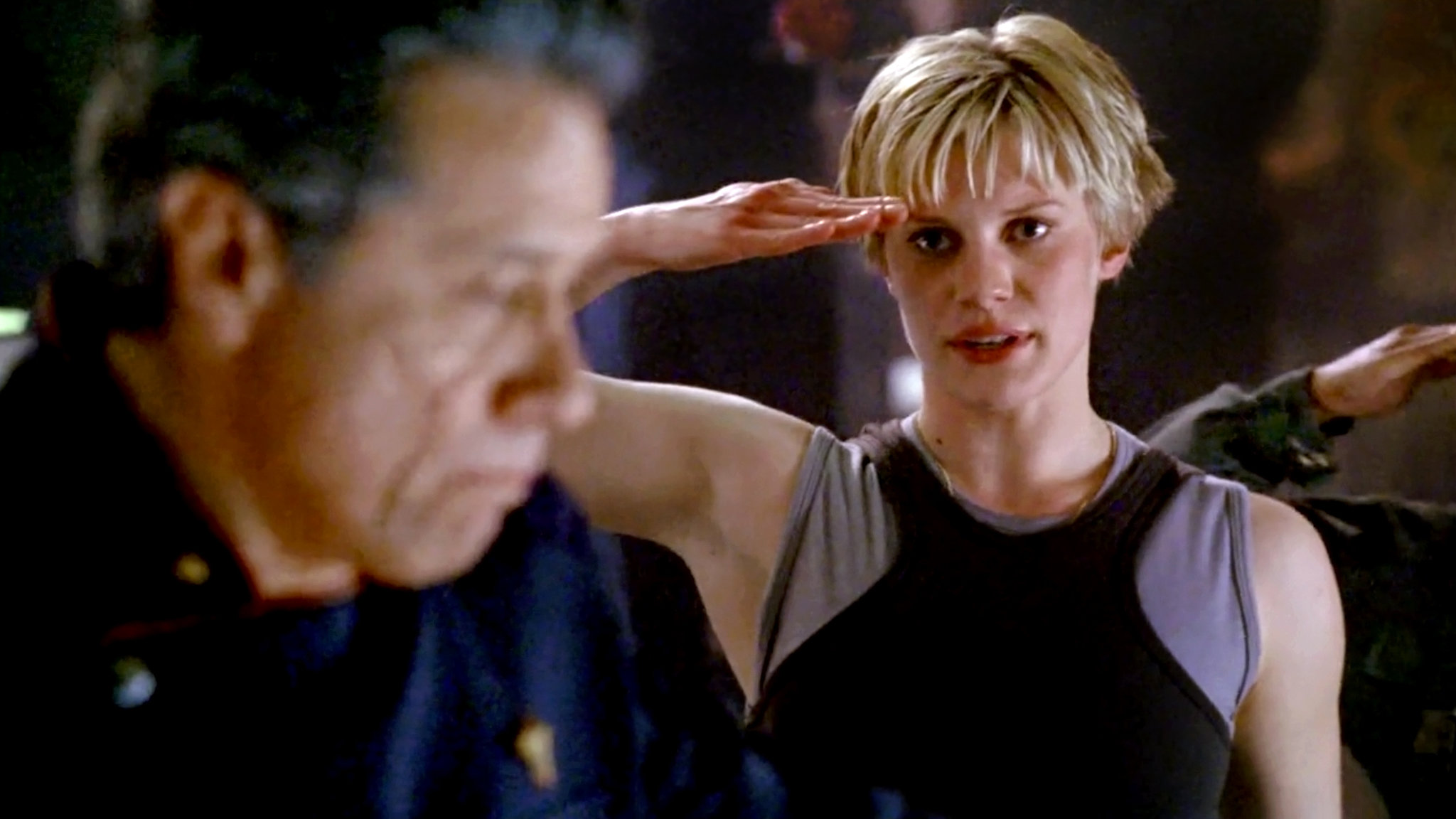 With SyFy hosting a pants-dampening marathon of Ron Moore’s 2003 reboot this month – ahead of some sort of spin-off series on Peacock, likely next year – let’s take a look at some of the most memorable moments from “Battlestar Galactica”.

A reworking of the classic ’70s series – one which, despite a few naysayers saying Starbuck had to have a penis (load of croc!) was lauded by critics and audiences until the end of it’s four-season run – Moore’s series run much deeper than many sci-fi/fantasy offerings of the time. The series, which encompassed incredible effects but more memorably standout performances and writing, is still considered not only one of the best remakes of all time but one of the best TV series period.

Universal has unsuccessfully tried to relaunch “Galactica” as a movie and television franchise in recent years – Bryan Singer was once attached; needless to say, he isn’t now – but the furthest along of all the projects would seem to be a Sam Esmail-spearheaded series that, while not a sequel, would be set in the same universe as the most recent incarnation.

For those that haven’t caught the series in a few years, let’s remind you just how great an offering this thing was by revisiting several incredible moments from the show :

The ‘So Say We All’ Speech

The cast have said it was hard to separate Edward ‘Eddie’ James Olmos from his character, Admiral Adama, and his performance in this early, motivational speech (did you know ‘So Say We All’ was ad-libbed!?) hints as to why :

”I love the fact that Ron Moore and David Eick allowed me to create this character, because basically it was my creation psychologically and spiritually, and everything to do with it”, the acclaimed actor told GalacticaTV. “They allowed me to go from a very, very dilapidated guy, who had given up, just about. He was part of the relics of the museum that he was now floating around with in the universe [and he was] very strong, and a very, very great leader. It’s been amazing to be allowed to have this arc. I tend to agree with you. The emotion, the journey, has been very, very difficult. If you watch the series from the beginning to the end and you watch the characters evolve, you are absolutely right. I think everyone wasn’t that well defined, and I think that everyone takes a hell of a journey. I think Adama’s journey has been just brutal.”

Laura’s “I’m Coming For You” meltdown!

Later on in the series, when she’s much closer to Adama, President Laura Roslin gets a little rattled when she’s fooled into thinking her dearly loved colleague has been killed.

“I loved it because we got to touch on Laura Roslin’s rage”, Mary McDonnell, who plays Roslin, told attendees of the 2017 ATX reunion panel.

Everything Gaius Baltar – but especially his more high-strung moments!

In Gaius Batlar, James Callis relished. One of the highlights of the hit series, Callis’s eccentric antihero barely held it together even at the best of times.

Callis said in a 2006 interview with DragonCon that he based Baltar on a scientist he knew back home. “There is someone in London, who will remain nameless, who is a brilliant, double-first, Oxford scientist.  He has more letters and things after his name and he is possibly the worst liar I’ve ever seen in my life.  I know him quite well.  He’s absolutely brilliant and he’s remained, in some fashion, like an infant.  He’s always remained a bit like a kid.  I remember he was on the phone to his wife one day and he’s like “Oh, I can’t believe it!”  You know, it’s just total bare faced!  And I thought, wouldn’t it be interesting to play someone who’s really brilliant who’s a really bad liar. [laughs]  He’s pretty transparent.  That was something that I thought I could bring.  That’s the initial thing, and then it exponentially grows.  The writers check out what you’re doing and yeah, it grows.”

When mixed-up workman Felix Gaeta (Alessandra Juliana) and manipulative rebel Tom Zarek (Richard Hatch) decide to unite, all matter of poop hits the fan. Regrettably for them both, they get their comeuppance.

Juliana told Galactica TV that “[Gaeta] initially comes to Zarek and Gaeta in a lot of respects is the instigator of that whole thing. Zarek would not have — I don’t think would have the clout or the military backup to mutiny within Felix coming to visit him and forming that alliance. So in a lot of sense I think it’s the other way around. I think that if Zarek had not been interested in mutiny at that point, Gaeta would have found someone else on the Quorum to be a political henchmen for his adaption.”

Yes. She is. But there’s more…

“We knew we were going to bring her back, so we wrote two endings for that script. One is that she doesn’t die,” writer Michael Angeli told SyFy. “That’s the one that we circulated, because, first of all, we wanted it to be a surprise. Second of all, we didn’t want to raise concern with the cast thinking, ‘Oh my God, they’re killing her off. What are they doing?’”

“Well, somehow the real draft got leaked, and there was just chaos, Angeli continued. “Everybody thought, ‘You’re killing off Katee [Sackhoff]?’ Leading the charge was Eddie Olmos. He was like, ‘This is preposterous. This is wrong. She’s one of the signature characters in the show. What the hell are you guys doing?’ Her mother even called, saying, ‘Why are you killing her? How could you possibly . . . ?’ Of course we had to explain what was going on, and come clean about everything. But it was astonishing how militant Eddie got about keeping her on the show.”

When 4 of the final 5 discover the truth…

To the tune of a very cool remix of Jimmi Hendrix’s “By the Watchtower”, four of the “skinjobs” are revealed to the audience… and each other.

“I didn’t like that I was a Cylon at first, but as the story went along, and seeing where they went with it, I really liked it”, Aaron Douglas told Aaron Douglas Fans of Chief Tyrol’s big moment. “I liked the fact that the Chief really humanizes the Cylons more than anyone else, because he is such a blue-collar guy, he is so real, and ultimately, the most human. What you see, is what you get, with Chief Tyrol. He is a grunt that makes the world go ‘round. He was the one that basically told the others in the Final Five, ‘stop yer bitchin’ and get on board.’

One of the final 5 admits he’s a “skinjob”

Wowzers. What a moment. When Colonel Tigh (Michael Hogan) fesses up to best friend and boss Adama that he’s a cylon, things get fiery.

But, as Olmos said in an interview shortly after the airing of the episode, “Tigh really means it when he says: “I’m the guy who I am.” In other words, he’s going to die a human being, because even after he found out, he still can’t accept or understand it and how in the world did this happen to him? It’s really funny. It’s sad. It’s very sad, because there’s pain in that, strong pain. You see it happen and he goes through it, and you see it in his face and his eyes, you know. It’s really, really amazing. ”

The wrong person got airlocked.

Remember when Cally (Nicki Clyne) got some fresh air!? Damn you, Tory!

“Most of that was done on computers after the fact if I’m correct”, Clyne says of the disturbing scene. “I filmed basically just up to the moment where we get sucked out, and then we had stunt people I think actually get sucked out, so there was that image. And then us in space is beyond me. I don’t know, Playmobil people perhaps? (both laugh) But you know, all the freezing cold, shivering, all that believable stuff was pure acting.”

A tip of the hat to the one that started it all!

As the fleet, led by poor Samuel Anders (Michael Trucco), drives into the searing sun… you can hear the theme from the original ’70s series.

The “Battlestar Galactica” marathon runs on SyFy from Monday, April 20.

Continue Reading
You may also like...
Related Topics:Battlestar Galactica, featured